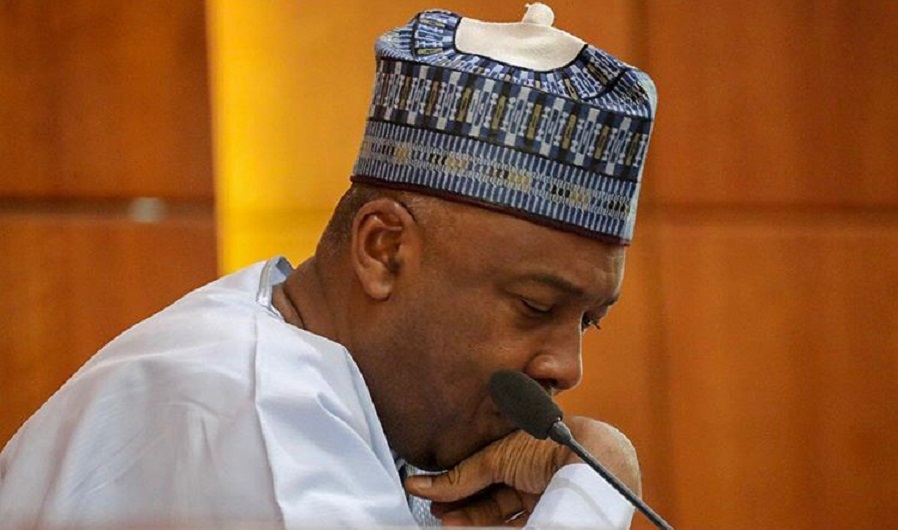 “The activities of Dr. Bukola Saraki, his Personal Assistant, Abdul Adama other personal staffs (sic) that helped him in laundering the monies in bits including the companies that helped transform the naira to foreign exchange thus making it possible for him in washing the cash overseas are in contravention of the provisions of the Money Laundering Act. They are recommended to be prosecuted for offenses relating to Money Laundering and for breaching the Forex (Monitoring and Miscellaneous Provisions) Act, Section 12(1), Section 29(2) a and b, Section 39(3)(4) Section 30(1)(a), (2)(b).  “

The above quote was part of the recommendations of a high powered investigation of the finances of Kwara State between 2003 and 2011, during the period the current Senate President, Dr. Bukola Saraki, held sway as Governor.

Five years on, Police authorities have continued to look the other way.

Saraki, who was a member of the Senate on the platform of the then ruling Peoples Democratic Party (PDP) when the investigation was carried out, switched platforms to the All Progressives Congress (APC). He returned to the Senate on the platform of the new ruling party, and became Nigeria’s Number Three citizen. He is today the Director of the Atiku Abubakar Campaign Organisation, having returned to his old party, the PDP.

A Police source told Morning Mail that the authorities might have elected to steer clear of Saraki because of the defeat that the Economic and Financial Crimes Commission (EFCC) suffered with his trial at the Code of Conduct Tribunal for alleged assets falsification. That trial failed up to the Supreme Court.

But this report is different from that of the EFCC, according to the source, a senior Police officer who participated in the SFU investigation and indeed accused the EFCC of failing at the Code of Conduct Tribunal due to shoddy investigation and prosecution.

The SFU report, written by one Okpoziakpo E. Eloho, who was a Chief Superintendent of Police (CSP) at that time, was addressed to the then Commissioner of Police in charge of the unit, and was dated 14th March, 2014. It indicted the former Governor and some banks that allegedly helped him launder state funds.

One week after he was contacted by Morning Mail through his verified messenger account, Saraki’s spokesman, Yusuf Olaniyonu failed to respond to enquiries about the five-year-old buried report.

According to the investigators, for instance, a draft of N204 Million was awarded by Guaranty Trust Bank (GTB) to Saraki in a transaction that they believe formed part of instruments with which the then Kwara State liquidated his company’s various debts in the defunct Intercontinental Bank. That was after he was granted over 80% write-off to remove encumbrances on various properties he used to collaterize his loans; through a company, Skyview Properties Ltd.

According to the GTB documents, including bank statement of US Dollar account (2000-2013) made available to Morning Mail, a series of cash lodgments were found in the accounts of the companies solely belonging to Saraki within the period he was Governor of the state.

The investigation observes that the monies were deposited in cash by personal aides of the former Governor, most frequently by one Abdul Adama.

Police sources told Morning Mail that the pattern of the cash lodgments into the account between 8th February 2010 and 28th January 2011 amounting to about #484,416,000.00 was indicative of Money Laundering.

The Police report alleged that though Saraki’s aides took precaution by depositing various sums in such a manner as to beat the provisions of the Money Laundering Act, they were however betrayed by the frequency of the lodgments.

Document in possession of Morning Mail showed that Adama, a Personal Assistant was responsible for making the cash deposits allegedly using several suspected fictitious names and GSM numbers of several unsuspecting members of the public.

To avoid interrogation, Adama  filed harassment suit against the police in 2014, this is according to the court document obtained by Morning Mail at the High Court with civil Suit No.FCH/ABJ/CS/152/2014 pending before Justice A.R Mohammed.

Our investigation also reveals that one Austin Ikpi, a staff member in the Kwara state Government House also made a cash deposit of #35,000,000.00 into the account on the 18th of January 2011. Another person mentioned, Kennedy Izuagbe, who was Dr. Saraki’s personal Assistant and sole signatory to the account denied any knowledge of N39,999,000.00 allegedly deposited in his name on February 10, 2010.

In his defense, Toyin Pinheiro, a director and shareholder in the company has denied the various cash lodgments that were made into the account and had asked that Kennedy Izuagbe the M.D and Sole signatory to the account be asked to account for the lodgments.

Surprisingly, our investigation reveals that the account is domiciled with the GRA Ilorin Branch of GTBank where incidentally, all the transactions took place.

Examining the documents, we discovered that though GTBank reported the cash lodgments exceeding the maximum threshold, of single cash deposit, as prescribed by the Money Laundering Act 2004, it was ominously silent on the unusual frequencies of those deposits.

Morning Mail investigation is in custody of some other indication of money laundering from the inflows and outflows crisscrossing Saraki’s personal account, one Acquitane Oil and Gas Ltd and Carlisle Properties and Investment Ltd that prompted further investigations and request for the personal statement of accounts of the Senate President from GTBank and for Carlisle Properties Ltd from Zenith Bank and Acquitane Oil and Gas Ltd from Access Bank Plc.

An investigation of Saraki’s personal accounts with GT Bank made available to us include, naira personal account (0034967455), domiciliary accounts (0034967479Dollars) and British Pound Sterling (441/441953/3/1/0), revealing a series of cash lodgments during the period he was the Governor.

The bulk of these funds was deposited in bits; that is, less than $10,000.00 per cash entry to ensure that the lodgments didn’t fall within the transaction to be reported to CBN/NFIU as suspicious according to Foreign exchange regulation. Individuals who lodged these funds must be questioned to identify their source of naira.

On June 17, 2009, a total cash of $250,000.00 was transferred to pledge ledger and credited back to the account on September 7, 2009 to regularize a debit balance, the bank must shed light on this, one of the investigators told Morning Mail.

Based on our findings, according to one of the investigators, the following questions beg for answers:

This is contrary to Forex (Monitoring & Miscellaneous Provisions) Act hence the receiving account must be established and investigated through the Swift transfer telex copy.

The investigators also discovered a huge and consistent transfer of fund into Saraki’s credit card account with AMEX this is analyzed below:

BELOW IS THE POLICE REPORT

The Commissioner of Police,

RE: CASE OF MONEY LAUNDERING

At the end the investigation found as follows:

The Ministry had however in that letter requested the unit to investigate the role both Zenith Bank and Toyin Pinheiro played in the disbursement of the #200 million naira loan facility granted to Joy Petroleum by Zenith in 2009 which the Ministry of Justice observed thus:

While awaiting the outcome of the report sent to the Ministry of Justice, GTBank on 2nd0ctober 2013 responded to the unit’s inquiries on the source of the #204 Million Draft that formed part of instruments with which Dr. Bukola Saraki liquidated the indebtedness of Joy Petroleum Ltd to Intercontinental Bank by forwarding the statement of account for Skyview Properties Ltd as the source of the #204Million Draft. Also forwarded were loan offer letters extended to Skyview Properties Ltd and the account opening documentations.

The investigation also observed some other evidence of money laundering from the inflows and outflows crisscrossing between Dr. Bukola Saraki (personal account), Acquitane Oil and Gas Ltd and Carlisle Properties and Investment Ltd that prompted further investigations and request for the personal statement of accounts for Dr. Bukola Saraki from GTBank and for Carlisle Properties Ltd from Zenith Bank and Acquitane Oil and Gas Ltd from Access Bank Plc.

Upon scrutiny, the investigation found as follows:

Similarly, some of the inflows and outflows in the GTBank accounts of Skyview Properties Ltd and Dr. Bukola Saraki Personal accounts were observed to have come from other bank especially from companies associated with Dr. Bukola Saraki e.g Carlisle Properties and Investment Ltd and Acquitane Oil and Gas Ltd. This prompted a request to the banks including Zenith Bank Plc to provide details of those accounts where the inflows and outflows were observed.

That the frequencies of the cash lodgments are unjustifiable considering the nature of the business of the company.

Meanwhile the investigation, with respect to the Zenith Bank account discoveries, has been intensified to bringing the under-listed persons in for interrogation.

Other companies from whom there were unusual inflow to the account e.g Schlumberger, MTN etc.

The activities of Dr. Bukola Saraki, his Personal Assistant, Abdul Adama other personal staffs that helped him in laundering the monies in bits including the companies that helped transform the naira to foreign exchange thus making it possible for him in washing the cash overseas are in contravention of the provisions of the Money Laundering Act. They are recommended to be prosecuted for offenses relating to Money Laundering and for breaching the Forex (Monitoring and Miscellaneous Provisions) Act, Section 12(1), Section 29(2) a and b, Section 39(3)(4) Section 30(1)(a), (2)(b).

The investigation has also been extended to Access Bank with regards to ACQUITANE OIL & GAS from where the investigation observed a heavy cash inflow into CARLISLE PROPERTIES AND INVESTMENT the GTBank account of Skyview Properties Ltd. The investigation intends to establish the exact business relationship between the two companies and what the payment was meant for and whether it was a disguise to launder funds.

There is also the need to trace the property that was purchased by Dr. Bukola Saraki as revealed by the Pounds Sterling Telex Copies obtained from the bank.

It is also suspected that all the transfers made to American Express Europe Ltd were used to purchase properties abroad. There is also the need for the investigation to trace these properties.