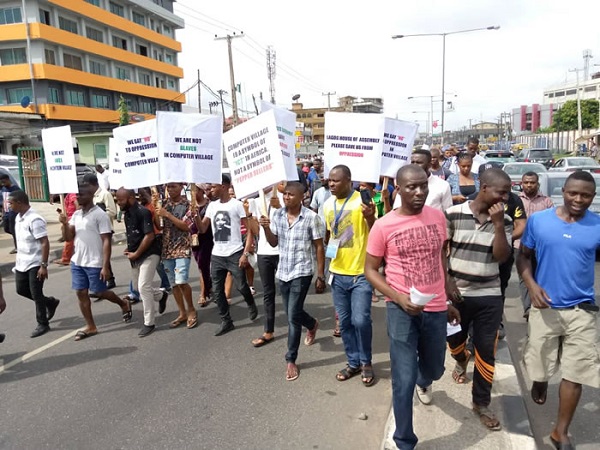 Some professional associations at the Computer Village in Ikeja, Lagos have rejected the imposition of Iyaloja and Babaloja to oversee affairs at the technological hub and called for the state government’s intervention.

They made the call during their protest march to the Lagos State House of Assembly against the imposition of Iyaloja and Babaloja run the affairs of the hub.

According to them, the technological hub has already been regulated by the Lagos State Ministry of Wealth Creation, stressing that appointment of another individual or authority such as Iyaloja is unnecessary.

Mr Adeniyi Ojikutu, CAPDAN President, said that the critical stakeholders shut down the biggest Information Communication Technological (ICT) hub in West Africa in order to draw the government’s attention to the situation at Computer Village.

Ojikutu alleged those agitating for the imposition of Iyaloja had no business record or address whatsoever within the tech hub.

According to him, the imposition of Iyaloja is a threat to the peace being enjoyed for more than 25 years at Computer Village.

“We are here to beg the governor of Lagos State and the Lagos State House of Assembly who are the true representatives of the people to come to our aid.

“We do not want crisis in Computer Village, we have been living in peace.

“Computer village is a micro Nigeria where Nigerians and foreigners co-exist in harmony.

“We have over 3500 companies and multinationals from within and outside the country registered under the Corporate Affairs Commission (CAC).

“Titles such as Iyaoloja, Babaoloja are alien to us and we see them as a mischievous act to breach the peaceful coexistence; that is why we are appealing to government to come to our aid,” he said.

According to the CAPDAN president, “we as professionals are also registered under the Lagos state Ministry of Wealth Creation.”

Ojikutu said that letter had been written to Iyaloja-General on the matter but no response yet.

Mr Godfrey Nwosu, President, Phone and Allied Products Dealers Association of Nigeria (PAPDAN), said that the title of Iyaoloja was alien to most people in the tech hub, especially having come back from overseas with wealth of knowledge to create wealth for the people through technology.

“We do not sell pepper, yam or all that, so it is different thing trying to categorize Computer Village with other regular markets.

“We are quite different from that, if you come into Computer Village you appreciate the fact that it is a community where Nigerians out of their own volition create wealth.

“A lot of people in Computer Village who were on the street have gone to school, developing software and making money without government’s support,” Nwosu said.

According to him, most of the companies grew out of nothing and most of the funds circulating in Computer Village came from the goodwill of those who have traveled far and wide, describing the hub as an international brand.

The Majority Leader, Lagos State House of Assembly, Mr Sanai Agunbiade, who addressed the protesters on behalf of the Speaker, Mr Mudaisuru Obasa, said the peaceful protest was in line with democratic tenets of expressing grievances.

He assured that the matter would be presented to the Assembly.

“You have come and presented your paper and you can be rest assured that the House of Assembly in its usual character will look into your complains.

“Where and if necessary, you will be invited; all we want in Lagos is peaceful coexistence and growth of business because Lagos State is the economic centre of the country.

“We will do everything to enhance peaceful coexistence without doing anything to tamper with the interests of those concerned,” Agunbiade said.

No part of Nigeria will suffer neglect under my administration – Buhari