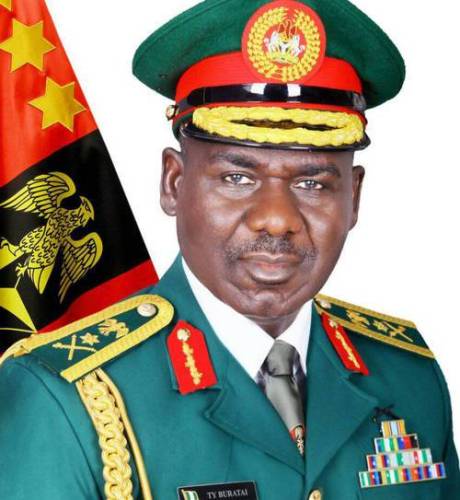 Is he a legend or not? In retrospect of the article written by one Mr. Charles Ogbu, which to my understanding, he did not only dispute the Legendary status of General Burati but disparage the prevailing circumstances on the ground, the time and the space the author is using to present it particularly to the school children in the form poem/folklore, he deemed improper and a sham.

Nigeria being a Democratic State with freedom of speech, expression and association as entrenched in the constitution afforded Mr. Charles and many of ilks to state their views about the Author Dr. Abubakar Mohd Sanni. However, having digested Mr Charles write-up, there is a biblical injunction which says that “Only the living can praise God” and it is better to appreciate someone who has done exceedingly well for his country while alive than when in green land and not when such Icon is gone. Of a truth Buratai has performed excellently well in the Nigerian Army and Conquering the insurgency in the Nigeria land territory.

I will like to refresh Mr. Charles Memory that insurgency did not just start up in Nigeria, before the appointment of Buratai, the Boko Haram Insurgency has conquered parts of the North-East, North-West, infiltrating Abuja, Some Military locations, Kano and Jos, even in Lagos thereby causing collateral damages in all these aforementioned locations. Since the appointment of Lt-General Buratai (COAS), we are now witnessing peace in all these locations that have been reclaimed apart from being a soft target that are being attacked by the insurgents.

Also, it was under the auspices of COAS, that the Nigeria Army witnessed massive renovations and constructions, permit me to mention a few; Creating an overhead corridor connecting Army Head-Quarters to officers and main canteen and other adjoining departments which are annexed to the main Army Head-Quarters. Renovating and Constructions of modern facilities in military hospitals and equipping them with modern facilities and power generating sets.

It was under COAS watch, modern constructions are being undertaken in Army training schools and establishments, renovation of military cantonments, Barracks and gymnastics for physical exercise, likewise tailoring factories in Nigeria Army division are being established. Officers and soldiers training are being done locally and internationally thereby making them professional and at the same time enhancing professionalism. The Niger/Delta region of this country before the accession of Buratai, was witnessing murdering, kidnapping, pipeline Vandalism and various militant groups were being formed with a very high level of rapaciousness, so much so that the unity of this country is threatened.

Also, I’d like to digress a little by asking Mr. Charles, what was the intent of the IPOB movement if not to cause disunity in the Country Nigeria, which constitutionally, is a highly treasonous offence, ergo, I will still like to address Mr.Charles Ogbu about what the constitution says about treason. ”Any person conspiring with any person, either within or without Nigeria, to levy war against the State with the intent to cause such levying of war as would be treason if committed by a citizen of Nigeria, is guilty of treason and is liable to punishment of death”. And hence tell me, which other way are the Military supposed to go about combating War without weapons. Mr.Charles, you may be a learned fellow but when it comes to war strategies and tactics it is best to leave it to the Military who are seasoned in the act.

Moving Forward, COAS has also launched various operations across Niger/Delta area and South-East which degraded all those recalcitrant and belligerents stratum fermenting Anarchy bellicosely in those areas and thereby destroying our economic facilities which affected our economy. Thank God, Agriculture is now yielding good dividends in Nigeria considering the security apparatus Buratai put in place with regards to Nigeria in Niger/ Delta and parts of South-East, the people of that area are going about their normal duties without fear of harassment and Molestations. Buratai also respected all the traditional institutions across the geopolitical zones especially where we have military establishments by visiting them when check on military information in their domain.

The peace and tranquility that we have enjoyed during the elections was made possible with the support of the Nigerian Army under the watch of Buratai. He placed the military on red-Alert before the election with proper deployments of troops and issued stern warnings to officers who wants to be political, such officers are advised to resign from the army, otherwise , comply with rules and regulations governing the army.

Never the less, it is when you thank and praise the appropriate level that the outpouring of blessing rains down as the proverbial windows of heaven open (“gbalaja”which simply means very wide open) going by the meaning of a legend which states that someone who has been superb or extraordinary. It is when you realize that the achievements of Buratai , that you can appreciate the Nigerian Army, the consequence of which can bring spontaneous performance of the Nigerian Army as this will improve their morals because the pat on the back shall be extended to the least rank in the Army by COAS.

What the present COAS whom I will call EAGLES with vision, courage, boldness and ‘‘GENERAL MARSHAL’’ of his own generation did regarding the peace being enjoyed in Niger/Delta and the South-east likewise North-East and North-West areas affected by the insurgency apart from Zamfara and Kaduna states which are witnessing prolific murdering activities, kidnapping and likely because of mining activities; Considering the above background Buratai has performed extraordinarily well and curiously more than any COAS, since the inception of the Nigeria Army by transforming the Nigerian Army professionally, improving infrastructures and maintaining peace and security in the country through execution of many internal security operations.

Howbeit, in a country where hooligans and political thugs are celebrated on a daily basis, I think, it will behoove us as individuals, as a community, and as a nation if we failed to recognize the present achievement of General Buratai COAS as a legend that he is, we fail to celebrate Justice Oputa, Justice Nasar, Justice Elias, FRA Williams when they were alive and we witnessed what the negligence has caused, as we are privy to the rot inherent in the judicial systems in present day. There is a cliché that says” the result of hard work is more work” which invariably points out that when you are recognized for your and celebrated hard-work the populace, the community receives the impact of more of your work.

Also, coming from a person of Mr.Charles educational background, I believe it is suffice to say, ‘ it is advisable for Mr. Charles to stick to the lecture room on studies pertaining to his discipline as he has no iota of warfare strategies and tactics employed in keeping the peace and security of a nation together. Ergo, the opprobrious content of his write-up, not only shows how intemperate his choice of words are , coming from a supposedly learned person is indeed a hurricane of unchecked obduracy and I can only conclude that like many of his ilk, he can only be said to be plainly seeking Cheap attention.

Regarding the confrontation with the EL-zakzaky group in Kaduna; Mr. Charles Ogbu, assuming you are a COAS and you are passing a Location designated cleared route and surprisingly you are ambushed by bandits, please tell me what would you do as a COAS? What will you do to become a Legend? Have you ever done anything remotely noteworthy aside from disparaging other people’s legacy? And who even informed you that the book has been authorized to become literature books for school pupils?

Majekodunmi is a retired Col and served in the Nigerian Army.

Buhari: Why and how he won, by Garba Shehu

What’s wrong with these end-time Governors?