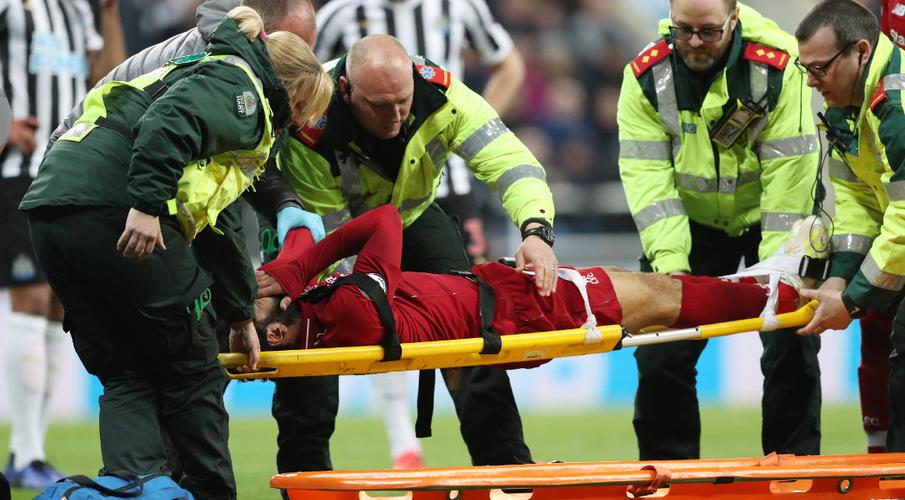 Liverpool struck late through Divock Origi to move back top of the Premier League with a thrilling 3-2 win at Newcastle on Saturday and keep their hopes of a first title for 29 years alive but suffered a major scare after injury to Mohamed Salah.

Liverpool lost Salah to a head knock that will make him a doubt for Tuesday’s Champions League semifinal, second leg against Barcelona.

Newcastle had twice come from behind through Christian Atsu and Salomon Rondon to cancel out goals from Virgil van Dijk and Salah.

However, Jurgen Klopp’s men piled the pressure back on Manchester City by moving two points clear of the champions thanks to Origi’s header four minutes from time.

Origi celebrating his goal against Newcastle United on Saturday…

The title remains in City’s hands as they have two games remaining to Liverpool’s one.

However, in a recurring theme of a thrilling title race, Liverpool dug deep late on to continue asking questions of the champions.

Faced with a difficult balancing act to strike between keeping Liverpool’s hopes of the title alive and preparing for Barcelona’s visit to Anfield in midweek, Klopp made four changes to the side beaten 3-0 in the first leg at the Camp Nou in midweek, while Roberto Firmino again missed out due to a minor groin tear.

Trent Alexander-Arnold was one of those recalled and the England right-back was to have an eventful evening at both ends.

The visitors’ showed no signs of tiredness early on as Salah twice fired off target at the back post, but Newcastle were orchestrators of their downfall when the opening goal arrived on 13 minutes.

Alexander-Arnold’s corner found Van Dijk completely unmarked as Rondon slipped and the PFA’s Player of the Year powered home his fifth goal of the season.

Newcastle had barely ventured over the halfway line in the first 20 minutes but levelled with their first serious attack.

All of a sudden Newcastle looked the more dangerous side as Ayoze Perez turned Van Dijk before smashing off the crossbar.

However, an enthralling first 28 minutes took another twist when Alexander-Arnold made the most of his reprieve to still be on the field with his second assist of the night.

His cross found Salah inside the area, but the Egyptian still had plenty to do as he cushioned a finish into the far corner on his weaker right foot to move two in front of teammate Sadio Mane and Sergio Aguero in the race for the Golden Boot.

Mane could have made it 3-1 before the break when he was denied by Martin Dubravka and Daniel Sturridge, deputising for Firmino, also blazed over a golden opportunity early in the second period to Klopp’s dismay.

Moments later that miss looked to be all the more costly as Liverpool did not clear their lines from a corner and the ball broke for Rondon to fire sweetly past the helpless Alisson Becker.

Worse was to come for Liverpool as Salah was caught on the head by Dubravka as the Slovakian goalkeeper raced from his goal to punch the ball to safety.

He was stretchered off, his hands over his face to applause from both sets of supporters.

Without two-thirds of their prolific frontline, Liverpool would have been forgiven for thinking their chase of City was up.

But, not for the first time this season, Origi, who scored a 96th minute winner against Everton in the Merseyside derby in December, came off the bench to score a vital late goal as he got his head to Xherdan Shaqiri’s free-kick.

IS claims it killed 10 soldiers in Borno