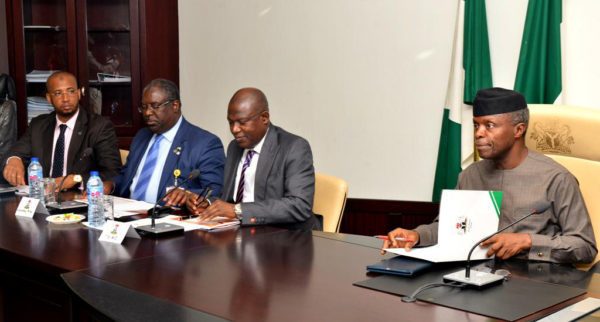 The Federal Government on Monday in Abuja directed the Corporate Affairs Commission (CAC) to extend by three months, the special window for Micro Small and Medium Enterprises (MSMEs) registration in Nigeria.

Laolu Akande, Senior Special Assistant to the President on Media and Publicity, Office of the Vice President, in a statement, said the gesture was spurred by the successes recorded in the first 50 per cent discount window.

Osinbajo gave the directive at the first quarter MSMEs stakeholder meeting held at the Presidential Villa.

The special business name registration window of 50 per cent discount was granted by the Federal Government through the CAC to help to bring as many MSMEs to formalise their businesses.

The vice president also directed the Standard Organisation of Nigeria (SON) and National Agency for Food and Drug Administration and Control (NAFDAC) to harmonise issues relating to overlapping responsibilities for product registration.

Osinbajo also directed relevant government agencies to come up with better funding strategies for small businesses in the country.

“Having listened to all the issues raised in the report and from your various contributions about funding, I think you should come up with suggestions on better funding for startups and MSMEs.

“We need to address this issue as quickly as possible,” he said.

He said relevant agencies of government must ensure that loan beneficiaries were equipped with the necessary skills and knowledge to better manage their businesses.

Osinbajo urged regulators in the MSMEs sector to leverage technology to help build capacity for owners of small enterprises as well as broaden the impact of their interventions.

He solicited the support of the relevant agencies for the Shared Facilities project for MSMEs which has already commenced in locations across the country.

Earlier, a presentation on the National MSMEs Clinics indicated that the clinics had been held in 23 states of the federation while One-Stop-Shops had been established in seven cities and shared facilities built in Oyo and Bauchi states.

The report also indicated that business registration increased from 54,000 to 163,000 within six months of introducing the special window for subsidised registration costs.

In his remarks, the Managing Director of the Bank of Industry (BOI), Mr Kayode Pitan emphasised the need for MSMEs to establish a company to de-risk BOI loans.

He said the organisation was working in partnership with the Development Bank of Nigeria to enhance access to finance for MSMEs by providing a guarantee for commercial banks.

The meeting was attended by the Special Adviser to the President on Economic Matters, Ambassador Adeyemi Dipeolu, and heads of relevant agencies in the MSMEs sector including the BOI, Federal Inland Revenue Service and NEXIM Bank.