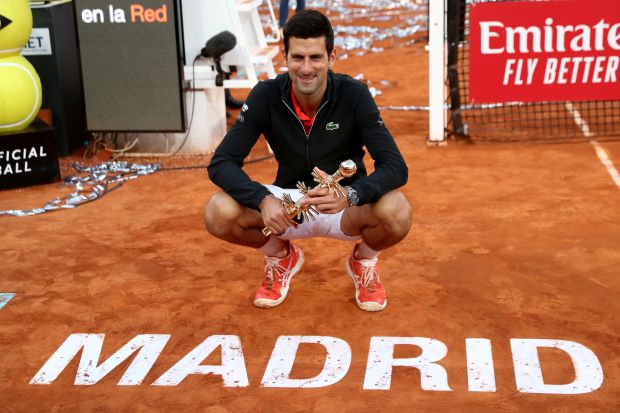 Delighted world number one Novak Djokovic said he was back to his best after winning a third Madrid Open title on Sunday, defeating Stefanos Tsitsipas 6-3 6-4.

Djokovic’s victory was also a record-equalling 33rd Masters 1000 title for the Serbian, drawing him level with great rival Rafa Nadal at the top of the all-time list.

“I wasn’t playing my best tennis after the Australian Open. So, I was looking to regain momentum,” Djokovic told reporters.

“I played some of my best tennis here. It’s a big win obviously for me today and in this tournament. I’m really looking forward to continuing this streak in Rome (at the Italian Open).”

“He’s [Tsitsipas] very talented. He beat Rafa yesterday, he had a late night and he wasn’t as dynamic in his movement and that was probably due to his long match.”

The Greek eighth seed rarely threatened to reproduce the stunning display he had conjured up on Saturday when he knocked out home favourite Nadal.

Fifteen-times Grand Slam winner Djokovic was in command throughout as he continued his impressive French Open preparations.

He had not dropped a service game all week in Madrid.

The Serb raced into a 3-0 lead as he broke his opponent’s first service game under blue skies and soaring temperatures in the Spanish capital.

He achieved this with his trademark backhand down the line causing Tsitsipas problems throughout.

Tsitsipas, who is enjoying a breakthrough season, rallied in the second set with the backing of the crowd.

But Djokovic broke in the ninth game to go 5-4 up, before serving out the match.

EPL: Chelsea held by Leicester, but point enough for third-place