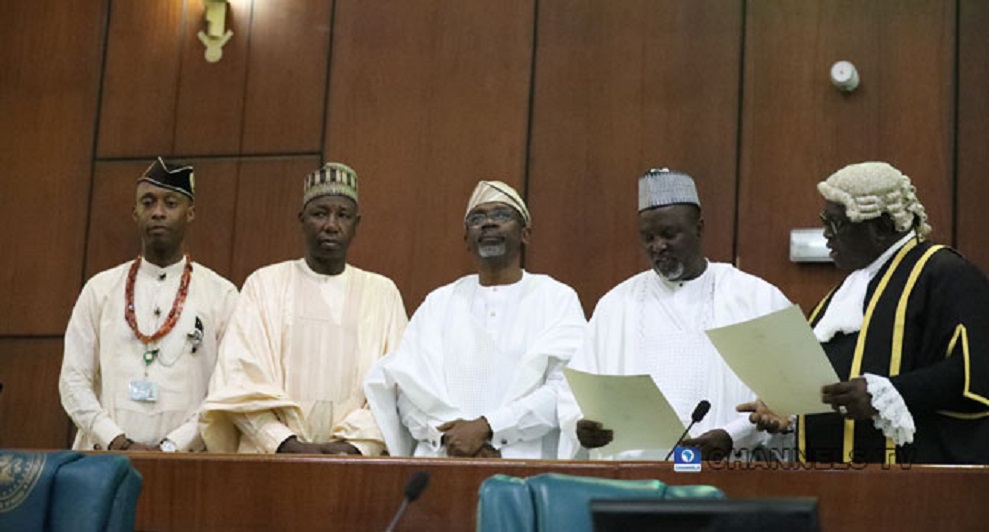 In what appears as an unprecedented demonstration of desperation by the All Progressives Congress (APC) anointed duo of Rep. Femi Gbajabiamila and Rep. Ahmed Wase, a sum of N36 million ($100,000) paid per vote to any member of Nigeria’s 9th House of Assembly.

NEWSVERGE gathered that the newly elected members were to snap the CARD with their ballot papers after voting to confirm their vote and with this, a sum of $100,000 (N36 million) will be collected.

Meanwhile, a notice to new Representatives obtained by NEWSVERGE reads, “Honourable Members-elect and Nigerians are hereby put on notice that this card MUST NOT BE BROUGHT TO THE CHAMBER for the purpose of compromising the integrity of the election to choose the next Speaker of the Federal Republic of Nigeria.”

Now the question is, is the NASS leadership now for sale? Where is the anti-corruption fight?

Where is Magu’s EFCC?

The N36 million worth gift card to buy vote

A picture of the card with N36 million ($100,0000) and the ballot paper to elect new Speaker and Deputy for the 9th Assembly

How the election went

At the lower Chamber on Tuesday, Reps. Femi Gbajabiamila, the All Progressives Congress (APC) preferred candidate elected Speaker of the House of Representatives.

Gbajabiamila polled 281 votes from a total of 358 votes, while Bago scored 76 votes, with one invalid vote.

Gbajabiamila was the APC congress Majority Leader and the House Leader of 8th House of Representatives. He represents Surulere Federal Constituency of Lagos State.

Lawan defeated his main challenger and Senator representing Borno South, Ali Ndume, after the counting of the ballot by the clerk of the National Assembly, Mohammed Sani-Omolori.

Lawan scored 79 votes from a total of 107 votes, while Udume pulled 28 votes, with no invalid vote.