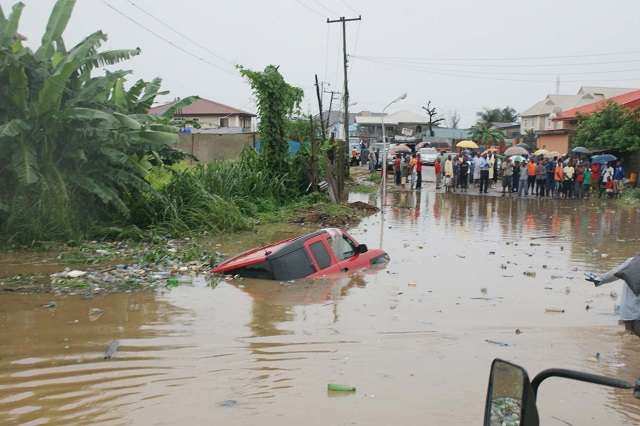 Some residents of Eti-Osa in Lagos State on Saturday urged Gov. Babajide Sanwo-Olu to address perennial cases of flood in the area, to enable them to sleep with their eyes closed in the rainy season.

The residents spoke with newsmen in separate interviews at a reception organised by Mr Gbolahan Yishawu, member representing Eti-Osa Constituency II at the Lagos State House of Assembly.

It was reported that the event, held at Giwa Military Barracks, was organised by Yishawu to thank his constituents for giving him victory in the 2019 general election.

The reception came on the heels of the inauguration of the 9th Lagos State House of Assembly.

Mr Wasiu Buhari, one of the residents, said that the state government had been trying its best, but more should be done to end flooding.

According to him, the issue of flood has been affecting a lot of residents and commercial activities in the area.

The resident, who commended Yishawu for good representation and empowerment, urged Sanwo-Olu to also focus on road infrastructure.

Mr Olusegun Adeyemi, another resident, described flooding as a perennial problem in the area, urging the government to redouble efforts at ensuring free flow of drains.

“Lagos is below sea level, but Gov. Sanwo-Olu can provide palliative measures to control the flooding. Anytime it rains, our hearts are up,” he said.

According to him, many of the residents also contribute to the recurrent flooding, and as such, there is the need to reorientate the people about activities leading to blockage of drains.

Mr Ibrahim Abdullahi, another resident, said: ”Our challenge here is flooding, and indiscriminate dumping of refuse has aggravated it.”

“We want the government to help us end flooding in Eti-Osa area. It is affecting us.”

Abdullahi, who also decried lack of potable water, commended Yishawu for his interventions.

Mrs Felicia Jayeoba, who won a freezer in the lawmaker’s empowerment programme, said that the state government must endeavour to find lasting solution to issue of flooding.

“Our problem is flooding. Help us tell our governor, Sanwo-Olu, to address this. They should tell the people to stop dumping refuse in drains,” Jaiyeoba said.

Speaking to newsmen, Yishawu said it was incumbent on him to host and thank the people for re-electing him for a second term.

On various gifts distributed to some 250 residents, the lawmaker said it was a way to say thank you and rejoice with them.

On the complaints about flooding by residents, Yishawu said the government had been trying its best to address the issue and would continue.

He, however, noted that the state is below sea level.

“Flooding is a perennial issue. What we are basically doing is to clear our drains, and that is being done.

“The new governor, Mr Babajide Sanwo-Olu, has promised that he is going to address that,” he said.

The event was attended by APC party leaders, members, market men and women, religious and community leaders, among others.