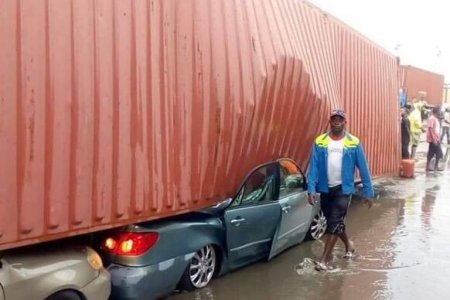 The Nigerian Ports Authority (NPA) said it had removed a container and an articulated vehicle involved in an accident at the First Gate of Tin-Can Island Port, Lagos.

It said in a statement by its General Manager, Corporate and Strategic Communications, Mr Adams Jatto, in Lagos on Sunday that it hurried to clear the scene to provide access to port users and guarantee ease of doing business.

It said that three imported cars were also affected in the incident which occurred on Saturday, adding, however, that no casualty was recorded.

“Our investigation showed that the accident happened when the truck driver was trying to manouvre his way and the container it was conveying rolled off and crashed on the already parked vehicles.

“While this incident is regrettable, the NPA as a responsible organisation has removed the container to provide access to port users.

“NPA assures her various customers and stakeholders of her continued responsibilities in ensuring that all necessary measures are taken in providing a secured and friendly environment for customer satisfaction and efficient service delivery,” Jatto said.

It said that it regretted any inconvenience the accident may have caused the public, especially the port community and assures them of prompt response to issues “when they occur”.