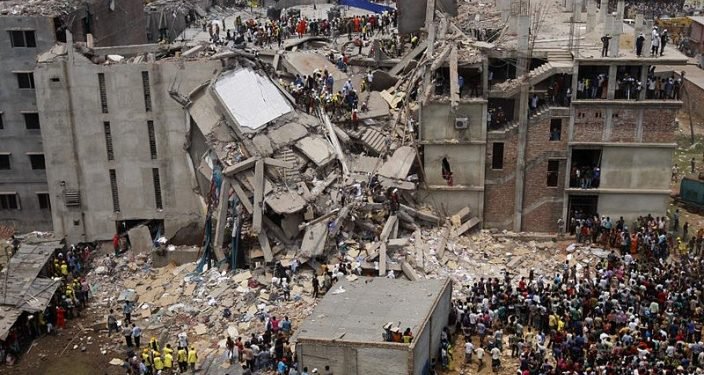 An Igbosere High Court heard on Thursday in Lagos that the Synagogue Church of All Nations’ (SCOAN) building was in perfect condition before the deadly collapse of the building that killed 116 people in 2014.

Dayo Fabiyi, a seventh witness in the ongoing trial of the trustees of SCOAN made the disclosure while being led in evidence by the fourth defendant Counsel, Mr Olalekan Ojo (SAN)

It was reported that the Lagos State Government had sued SCOAN over the building collapse that occurred on Sept. 12, 2014, killing mainly South African worshipers.

The defendants are two engineers, Oladele Ogundeji and Akinbela Fatiregun, charged alongside their companies – Hardrock Construction and Engineering Company and Jandy Trust Ltd.

They are facing trial on a 110-count charge of involuntary manslaughter while the registered trustees of SCOAN were charged with a count charge of erecting a building without approval.

They were arraigned on April 19, 2016 but they pleaded not guilty.

At the resumed hearing, Fabiyi said that he worked as a volunteer in the maintenance department of SCOAN from February, 2014 till date.

“I go round the facilities to check if there are any sort of cracks or deflections on the beams and I did such routine inspection on the collapsed building before it collapsed in 2014.

“There was no sign of deflections or any stress on the collapsed building before it collapsed,” he stated.

However, during cross-examination by the state prosecutor, Dr Jide Martins, Fabiyi affirmed that he was not involved in the investigation of the beams of the collapsed building.

He maintained, however, that cracks and deflections on buildings were always visible to the eyes.

Fabiyi also agreed that he did not use any mechanical device to check for deflections during his maintenance works.

During re-examination, the witness told the court that it was not only civil engineers that could detect cracks in a building.

He also noted that mechanical devices were only used to investigate deflections after the building had collapsed and not before.

“A defective building must have shown signs that the building is under stress. The collapsed building did not show any sign of stress before it collapsed,” Fabiyi said.

Earlier, the fifth defence witness, Ebenezer Ologuntoye, an engineer, had said that apart from foundational failure, other factors could be responsible for a building collapse.

Ologuntoye made the statement while being cross-examined by the prosecutor.

But during cross-examination, the witness said: “as a civil engineer, apart from foundational failure, other factors can be responsible for the collapse of a building”.

Answering more questions put to him by the prosecutor, he said that he was never contracted by the church to do any geo-technical work before the collapse.

Ologuntoye, however, said that as a geo-technical expert, he was involved in the Mile 12-Ikorodu Road project, although he was not directly contracted by Lagos State Government.

The witness said he had carried out work as a geotechnical expert only in support capacity and not as a chartered engineer.

While being re-examined by Mr Diyun Oluseye, the first defendant counsel, the witness said: “while carrying out investigations on the collapsed building, he took some samples necessary for the investigation.

“The samples enabled me to write reports on my findings which I have already submitted to the court.

“From my investigation the building did not collapse, due to foundational failure”.

Ologuntoye responded that the Lagos State Government had once invited him to give a report in the case of a collapsed building at Lekki-Gardens in Lekki, Lagos.

The witness affirmed that it was because he was experienced that made the government to invite him to work in such a high-profile project.

The sixth defence witness, Mr Olusegun Jimoh, was called and was led in evidence by defence counsel, Ojo.

Jimoh said he was the head of data unit in the Nigeria Metrological Agency in Abuja.

The witness told the court that he was subpeoned to court to present the certified true copy of the maximum and minimum atomspheric temperatures collated over time in Lagos State.

“We have a data processing unit which we use in sending such data to clients who requested for it.

“In this case the data was sent by hard copy and the data sent covered the maximum and minimum temperatures of each month from January to December of 2004 to 2018 in Lagos,” Jimoh said.

The witness said: “it is from our office that media houses get all the weather forecast announced on television stations in Nigeria”.

After listening to the three witnesses, who gave evidence before the court, Justice Lateef Lawal-Akapo adjourned the case until June 28 for continuation of hearing.