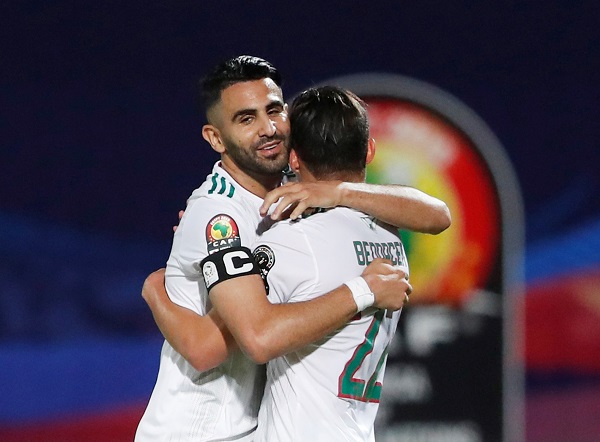 Riyad Mahrez led Algeria to a comfortable 2-0 victory over Kenya as they opened their Africa Cup of Nations finals campaign on Sunday in Cairo.

It was a competent display in this Group C match.

Kenya midfielder Dennis Odhiambo gave away the spot kick with an errant tackle on Youcef Atal.

Atal had made a run down the right wing before cutting inside and forcing the Kenyan into a clumsy attempt to stop him.

Mahrez netted the second nine minutes later as he ghosted unmarked into the penalty area to lash in a pass that was pulled back from the byline.

Mahrez’s powerful shot took a deflection off Kenya full-back Aboud Omar as it flew into the net.

It was as much as Algeria deserved with an overwhelming showing against the Kenyans, who looked largely outclassed on their return to the finals for the first time in 15 years.

Algeria’s strong pressing forced Kenya to constantly turn over possession and never gave them an opportunity to create any chances.

Kenya’s only promising attack came with just six minutes left when Ayub Timbe’s run down the right wing set up a chance for Michael Olunga.

But he was thwarted by the Algerian defence.

Earlier on Sunday, Senegal beat Kenya’s neighbours Tanzania 2-0 in the opening Group C match at the same venue in another one-sided meeting.

Keita Balde put them ahead in the first half and Krepin Diatta rifled a shot through a crowd of players for the second just after the hour to confirm Senegal’s dominance.

Algeria and Senegal meet next in Cairo on Thursday.

Related Topics:2019 AFCONRiyad Mahrez
Up Next

News Flash: Super Eagles first to qualify for AFCON Round of 16