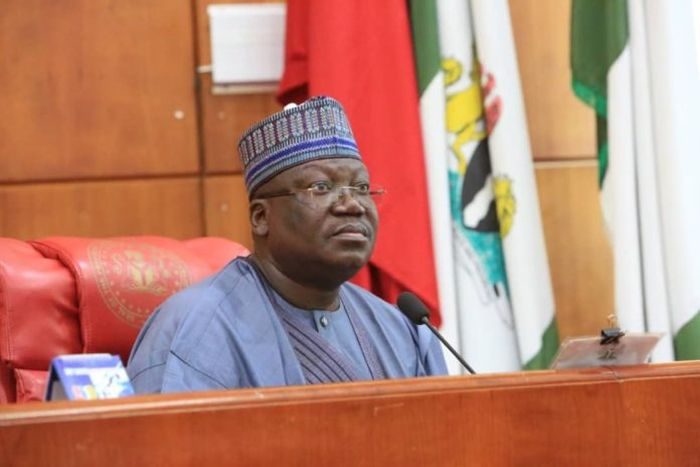 The President of the Senate, Dr. Ahmad Lawan has said that there was nothing like jumbo salary for National Assembly members as being speculated in some quarters.

Lawan made the disclosure, when members of the Senators’ Forum paid him a courtesy visit in his office in Abuja on Tuesday.

While further disregarding the jumbo pay issue, he revealed that his monthly salary as a lawamaker and that of his colleagues was N750,000.

“What I want to emphasize here is that I never believed that that there is anything called Jombo pay to the national assembly.

“The National Assembly members both the Senate and the House receive what is their salaries and I receive N750,000 as my salary.

“But I need to function as a senator, my office needs to be properly funded,” he said.

He pronised that the national assembly was going to be open to the general public in the conduct of its legislative activities, particularly in the area of funding

“National Assembly is going to be open to the public, I believe that the national assembly should have everything open; let Nigerians Know what we are doing.

“I believe that Nigerians need to understand this, we need to continually engage with Nigerians and I will also argue that we continue to explain to Nigerians, they deserve to know how their resources are being utilised.

“I believe that the national assembly needs proper funding because the legislature is so critical in any national development,’’ he said.

He went further that the ninth senate would be a by-partisan senate that would carter for the unity and progress of the nation.

“This senate is a by-partisan senate, senators consciously decided to work for us and we take that very seriously, what that means is that we are going to make for progress Nigeria.

“Because what we have done is to be patriotic and we belong to various political parties, but once we are here Nigeria is our constituency.

“The Senate is going to be united in the conduct of its oversight. It is a senate that will work for Nigeria. We are going to do everything possible to remain united in a very by–partisan manner and remain focused.

“Because the challenges against Nigeria is enormous, we need to enhance our of security.

“We need to make sure the economy works for every one for those at the lowest ladder and those at the top, this is necessary I don’t believe that rancor or hostility will yield any positive result.

“I have witnessed how rancour undermined national development, I also witnessed a very peaceful and cordial relationship that at the end of the day produce the kind of outcomes that Nigerian desire.

“So we are here to follow the part of peace, but we are going to be very seriously and systematically in our over sight.

“A minister or head of organisation that is expected to function must function,” he said.

He said the senate was determined to ensure that the Nigeria returns to the January to December budget process .

“We have to work together and archive what need to archive for Nigerians.

“We know the challenges and we will work hard to ensure that we get the solution.

“This senate is determined to ensure for example we pass the budget in three months and we believe this is achievable and doable.

“All we require is for the executive to provide the appropriation bill in good time may be at the end of September or early week of September.

“The national assembly will sit to ensure that there is defence of the budget by the MDAs and before we live for Christmas we will ensure that the budget is passed, so that we go back the January to Decemeber budget cycle,’’ he said.

Ealier, the Chairman of the forum, Sen. Khariat Gwadabe, said the meeting was a unique opportunity for them to interface with the president of the senate.

She also expressed confidence in Lawan’s capacity to lead the senate, having spent 20 years in the parliament, adding that the forum was ready to support the ninth assembly.

It was reported that the forum is made of both serving and former senators numbering about 600.

Naira closes at N359.5 per dollar at parallel market in Lagos