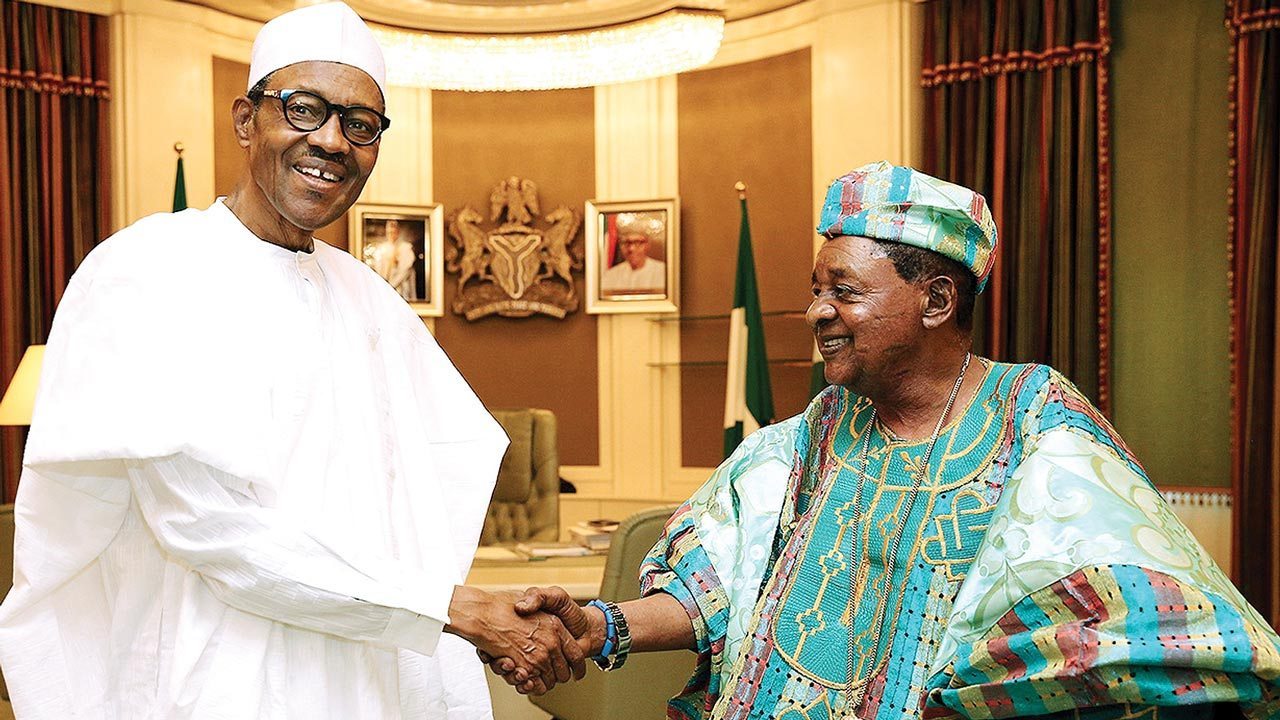 Alaafin of Oyo, Oba Lamidi Adeyemi, says traditional rulers are ready to work with President Muhammadu Buhari’s administration to restore peace and unity in the country.

Adeyemi, who made this assertion at a gathering of Yoruba leaders on Thursday, in Ibadan, called for collective efforts toward restoring peaceful and unity in the country.

He said that Nigerians must support President Buhari to rebuild the nation because he cannot do it alone.

It was reported that the gathering which also featured a presentation of the book `Awo’, was organised by Mr Alao Adedayo, the publisher of Alaroye, a Yoruba newspaper.

It was reported that the book ‘Awo’ is the Yoruba translation of late Chief Obafemi Awolowo’s autobiography.

The monarch cautioned the people not to blame the president, but support him to achieve the desired results for Nigeria, saying Buhari was doing his best for the nation.

“Stop blaming Buhari, we will work with him to achieve the desired nation.

“We have had our son as the president who never did all we wanted for us. Send us to Buhari and we will deliver the message,’’ he said.

The Yoruba monarch affirmed the contributions of Awolowo, to the Yoruba nation and Nigeria, adding that his records remained unmatched till date.

“I may not be friendly with Awolowo and his relationship with my father might be sour, but I can boldly say that his contributions to the Yoruba race remain unmatched’’

Adeyemi assured the people that the rift between the Alaafin and Ooni of Ife, has become a thing of the past, promising that further rift would be prevented.

The Alaafin said that there was no solution to the current national challenge, than restructuring of the nation’s federal system to the glorious old days, with some modifications where necessary.

Prof. Banji Akintoye, the guest speaker, said that the Yoruba nation had over thousands of years nurtured the culture of bounteous enterprise of advancing economic and social prosperity.

“We have advanced ourselves to the status of the most educated nation on the African continent.

“Our region, through efforts of our leaders made the region a pacesetter in Africa.

“Today, we are actively retrogressing in Yoruba land. Our graduates are walking the streets unemployable and unemployed,’’ he said.

Akintoye said that the people must continue to protect their culture of hospitality to foreigners and strangers, adding any evil invader would be expunged from the region without fail.

In the same vein, Amb. Tokunbo Awolowo-Dosumu, said that the youths in the region must uphold what Awolowo represented, urging them to stand and own their vision.

She lamented the absence of the state governors at the gathering, saying they have all benefitted from the legacies and contributions of Awolowo to Yoruba land.

Chief Gani Adams, the Aare Ona-Kakanfo of Yoruba land, in his own presentation, said that the struggle to proffer lasting solution to the increasing rate of insecurity in the region was of utmost priority.

According to him, we have started. This is the first place we are discussing the issue of insecurity.

“We are not writing-off the security summit held on Tuesday in Ibadan. It is part of the process.

“The process was not completed on Tuesday. What happen here today, we will build on the summit of Tuesday, ” he said.

Adams said that all the socio-cultural organisations in the region would come together under a common umbrella, called “Yoruba summit”.

He said that they would relate with the governors and security agencies, as well as foster unity among Yoruba monarchs.

“I am not saying I have the capacity to do it alone, but I should be one of the coordinators.

“We have started and the awareness is very high. We don’t want anyone to infiltrate our land to constitute nuisance here,’’ he said.

It was reported that the event was attended by Mr Rauf Olaniyan, the deputy governor of Oyo State, several Yoruba Obas, Chief Ayo Adebanjo and prominent Yoruba citizens.