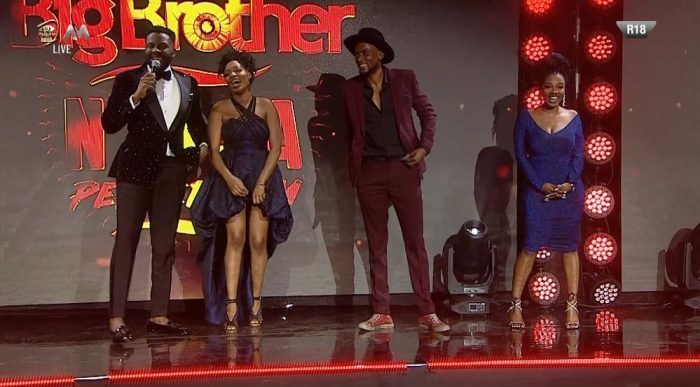 The long-anticipated fourth season of the Big Brother Naija reality show on Sunday, kicked off with 21 housemates.

It was reported that this is the highest number of housemates so far as 2017’s ‘See Gobe’ had 14 housemates and 2018’s ‘Double Wahala’ had 20 housemates.

The first housemate introduced was Avala, a 30-year-old from Ogun State who said she was in the show for the money.

She was followed by Khafi, a 29-year-old from Ekiti state who is a police officer in London and Omashola, also 29 from Delta state who is equally in the show for the money.

Although Avala wants the world to know her, he made it clear that she was not single and ready to mingle while Omashola revealed that he is a talkative.

28-year-old Frodd from Anambra State was announced next. He described himself as “odd, a bit complicated and a 9-5 guy who is not an entertainer.”

Meanwhile, 26-year-old Ike is from Imo State who wants to give viewers a show, drama and romance. He is also a model and asked that viewers expect a lot of attitude from him.

Ella is a giddy 30-year-old from Anambra state. She described herself as single but not available. She promised to light up the house.

27-year-old Isilomo from Edo state said she is very adventurous, single and ready to receive applications.

Fitness trainer, psychotherapist and paet-time stripper, Tuoyo is 24 years old and bluntly described himself as a flirt while 26-year-old Nelson from Rivers State said he is single and very available.

Nelson is a masseuse and past Mr Universe Nigeria while 28-year-old Sir Dee, who is a banker from Kogi state, said he is in the house for the money and experience.

Seyi is a 30-year-old from Ogun state known as ‘The Doctor’. The grandson of Obafemi Awolowo is not single but was in the house for the experience.

Meanwhile, 22-year-old Esther, a lawyer and part-time hustler who was excited, said she was there for the money and fun.

26-year-old Thelma from Imo State is also in it for the money and experience, promised to spice up the house. Gedoni is a 31-year-old designer from Cross River who is single and ready to go all out in the show.

Diane is 23 and from Kaduna. She said she is going to be herself and is in the house for the money. She added that she is a terrible dancer but loves dancing.

Mercy is 26 and from Imo State. She is a video vixen who feels great and accomplished; and hopes the guys in the house will match her expectations.

23-year-old Tacha hails from Rivers State and cannot wait to show the world herself. She added that loves to make money.

Jeff is 30 and from Anambra. He wants to have fun and cause trouble with the ladies. 28-year-old Mike is from Manchester and Lagos. He is married and openly declared his love for his wife.

Mike is a high jumper who will probably go for the Olympics in 2020. Also, Kim Oprah

The show also featured live performances from Burna Boy, Zlatan and Teni the entertainer who thrilled the crowd with hit songs and eye-catching dance steps.

It was reported that this is the first time the show will be shot entirely in Nigeria and winner will take home prizes worth 60 million Naira.