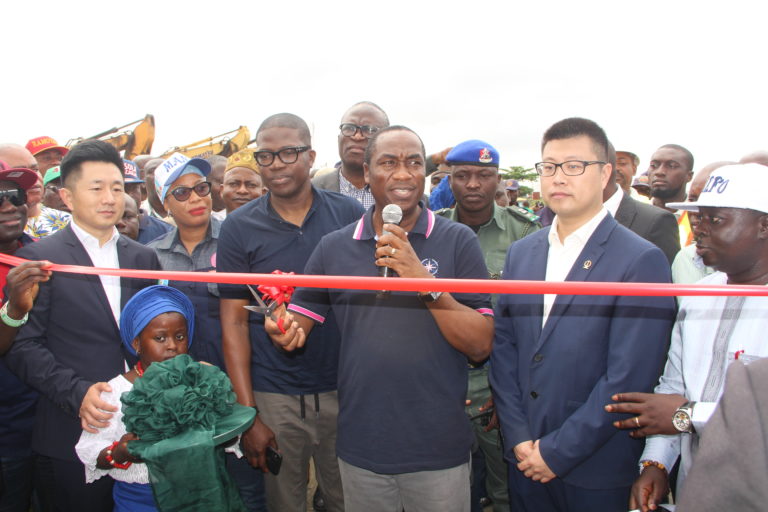 The Lagos State Deputy Governor, Dr Obafemi Hamzat on Tuesday urged residents to cooperate with road contractors and help monitor the continuation of the reconstruction of the Lagos-Badagry Expressway.

Hamzat made the call at the flag-off ceremony of the continuation of the Reconstruction of the Lagos-Badagry Expressway at the International Trade Fair Complex in Lagos.

It was reported that the road project started in March 2009, and 10 years into the project, Eric-Moore to Mile-2 and Mile-2 to Agboju has been completed, while Agboju to Trade Fair is being flagged off for completion.

The Deputy Governor said that the Gov. Babajide Sanwo-Olu administration had recognised the importance of the project and promised to ease the inconvenience being faced by citizens on the road.

“You will recall that on June 2, just three days after the inauguration of the Gov. Babajide Sanwo-Olu’s administration, we were here to show Lagos residents that this s a critical road for us, and that work will start again on this road. We are here today to fulfill that promise.

“As you recall, it’s a massive road project, from four lanes to 10 lanes. It’s a 60km lane from Eric-Moore all through to Okokomaiko.

“This is to say that we will again begin work on this road, and by the grace of God, the road from Agboju to the Lagos International Trade Fair will be completed by the end of this year, from four to 10 lanes.

“Then, palliative measures will be put in place from Trade Fair to Okokomaiko to make the road motorable for our people while construction will be going on,” he said.

Hamzat said that the state government was working with the Federal Government to make the road accessible to Seme border crossing.

“As at today, the Federal Roads Maintenance Agency, which is in charge of road maintenance, has awarded the rehabilitation of the four lanes from Igbo-Elerin to Agbara.

“This is because on that axis, you have pipelines and various infrastructure that need to be preserved, but at least, it will be motorable for residents and there will be no bottlenecks.

“The Federal Ministry of Works has also awarded from Agbara to Seme border. That will be six lanes. So, this will make it easier for residents to move around without obstructions,” he said.

Hamzat urged residents and road users to maintain orderliness, obey traffic laws and cooperate with the contractors handling the project.

“It is important to note that on our way here, we saw a lot of vehicles facing one-way. In the process, we stopped some of them and their excuse was that “there is no road.”

“Unfortunately, on that same road, we saw a young man that was hit by an ‘Okada’ who was driving against traffic.

“That young man can be somebody’s brother, son or cousin. So, we cannot say because the road is in a bad shape, we will now break the law.

“In the course of this project, there will be diversions, and we are appealing to citizens to be patient and cooperate with the contractors so that people will not get injured, because machines will be moved in here.

“We need to cooperate to make the work easier for quick delivery and for the benefit of residents. Help government to monitor the reconstruction project and the pace of work, send SMS to us so we can take action,” he said.

Also speaking, Mr Olujimi Houtonu, Permanent Secretary, State Ministry of Works and Infrastructure, said the road was one of the gateways of Nigeria that connected Seme, Republic of Benin and other countries in the west coast.

Houtonu said that the road was heavily congested, with a journey of 15 to 30 minutes now taking between three to four hours.

“This extreme congestion has a significant impact on economic activities, reduces the potential for future growth and is largely detrimental on the quality of life of residents on this axis.

“During the period of lull, the right of way and the work done so far have been compromised, and there is urgent need to recover them from shanties erected for illegal trading and habitation.

“There is also refuse and vegetal nuisance that needs to be taken care of to restore sanity to the road.

“There will be a task force to maintain order and clear refuse on the road to make it more nice for all of us,” he said.

In his remarks, Mr Bill Bian, General Manager of the Chinese Civil Engineering and Construction Corporation (CCECC),the contractors handling the project, promised to speed up work and ensure palliative measures to ease traffic in the course of the project.