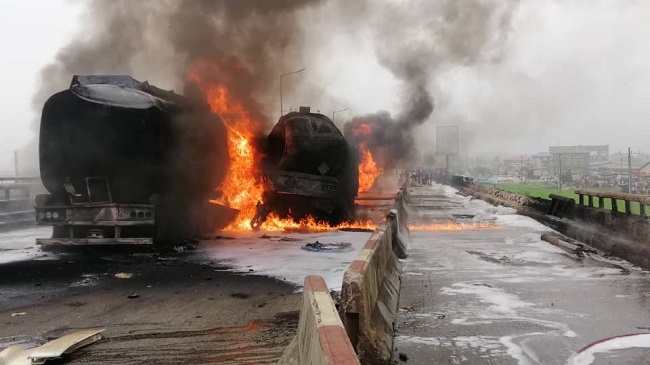 The Federal Road Safety Corps (FRSC) on Friday notified motorists of imminent diversion and safety precaution on the Lagos-Ibadan Expressway as the Federal Ministry of Work begins integrity test on the Kara Bridge.

The Corps Marshal of FRSC, Dr Boboye Oyeyemi, gave the notification in a statement by the Corps Public Education Officer, Mr Bisi Kazeem.

Oyeyemi said that the integrity test was pursuant to the recent fire incident that involved multiple articulated vehicles on the Kara Bridge on the Lagos-Ibadan Expressway.

According to him, the Federal Ministry of Works and Housing will be carrying out the integrity test on the bridge as part of safety measures to ascertain the extent of the damage on the road and effect the requisite repairs.

“As such, there will be an imminent diversion of traffic on the bridge to allow for smooth conduct of the test,” the corps marshal said.

Oyeyemi advised the motoring public to exercise caution at the diversion points, maintain common sense speed limit, and be lane disciplined while using the available portion of the road.

He said that the test would not require total closure of the bridge.

According to him, alternative routes can be explored so as to reduce burden on the motorable portion on the bridge.

The FRSC boss called on motorists to take advantage of the available routes to decongest traffic around the bridge.

“The alternative routes are; Ikorodu Road to Itokin-Ijebu-Ode to Iperu or Sagamu interchange.”

It was reported that there was an accident involving three tankers and a truck on Kara Bridge on Sunday morning (June 21, 2020).