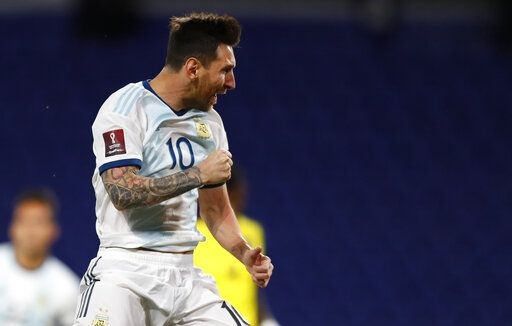 Argentina got their 2022 World Cup qualifying campaign off to the perfect start on Thursday when Lionel Messi’s penalty kick gave them a 1-0 win over Ecuador at home.

The Argentine FA piped fan noise around the empty Bombonera stadium and the chants of “Messi! Messi!” were vindicated as early as the 12th minute.

That was when he put Argentina ahead from the penalty kick spot, after Lucas Ocampos was fouled inside the penalty area.

Argentina had lost one of their last eight World Cup qualifiers against Ecuador.

Although they could not add to the scoreline, they never looked in danger of losing in a scrappy game against limited opponents.

The top four teams in South America’s 10-team group qualify automatically for Qatar 2022 and the fifth-placed side goes into an inter-regional playoff.