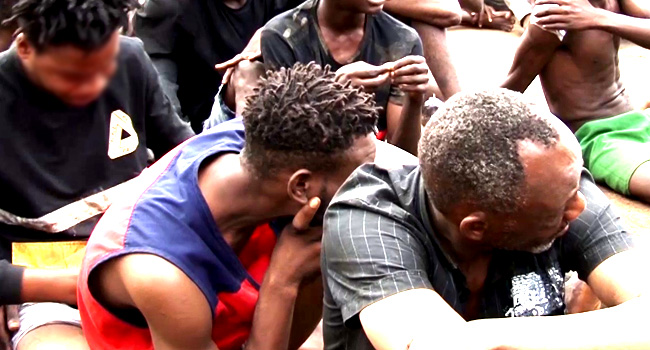 The Lagos State Police Command says it has arrested over 200 suspects for their involvement in the series of looting recorded in the state. Mr Hakeem Odumosu, who is the Commissioner of Police in Lagos, paraded the suspects and some of the items recovered from them on Tuesday at the Police Headquarters in Ikeja.

He explained that personnel of the command deployed on a recovery mission went on a house-to-house search of all looted items in various parts of the state.

The police commissioner stated that the arrested persons took advantage of the #EndSARS protest and got mixed with demonstrators to commit the crime.

He described the #EndSARS protesters as peaceful and well-behaved citizens, noting that it took the police a lot of professionalism before the suspects were arrested. “As far as I am concerned now, there is no #EndSARS person there,” Odumosu told reporters while pointing to the paraded suspects.

He added, “Because the #EndSARS people are responsible and reliable members of the public. There is no #EndSARS person that will go and carry a television, and you know when they mix with them (the #EndSARS protesters), we need a lot of patience, intelligence, and professionalism.

“All these ones are mop-up operations that we are doing, there is no way I will put on an army uniform without a trained army not seeing fault in the way I put it on because I am not trained to put it on. So, we have intelligence, we have sent our men out.”

Reacting to the attacks on some police stations in the state, the police commission insisted that the command has swung into full security operations.

He assured peaceful residents of the security of their lives and properties and urged them to continue to provide useful information that would lead to the arrest of more suspects.

On stolen arms and ammunitions carted away during the attack on police stations, Odumosu said the police have gone after the hoodlums and were already recovering them.

US Consulate announces application for 2020 academy for women entrepreneurs