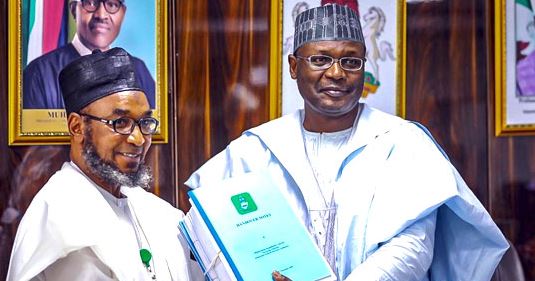 Yakubu at a brief handover ceremony at INEC headquarters in Abuja on Monday said it would be inappropriate for him to remain in office beyond Nov. 9, last day of his tenure, without Senate confirmation of his second tenure.

It was reported that Yakubu is still awaiting the confirmation of the Senate, following his nomination by President Muhammadu Buhari on Oct. 27, for a second tenure.

Yakubu said that the Commission was a constitutional body whose members were appointed for five years which might be renewed for a second and final term.

“This means that my tenure and those of the first set of five Commissioners end today.

“As you are already aware, the renewal of my tenure as Chairman of the Commission has been announced, subject to confirmation by the Senate.

“Our work as election managers requires us to enforce the law, regulations and guidelines.

“In doing so, we must demonstrate strict respect for, and compliance with, the Constitution of Nigeria and subsidiary laws.

“Consequently, it will be inappropriate for me to remain in office beyond today, Nov. 9, without confirmation by the Senate and swearing to another oath of office as provided by law.

“Pending the conclusion of the statutory process, the remaining National Commissioners have resolved that AVM Ahmed Mu’azu (rtd) will oversee the affairs of the Commission.

“It is, therefore, my pleasure to hand over to him in the interim. We have worked as a team for the last four years. Therefore, there is nothing new to anyone of them.

He also appreciated the director-general of the Electoral Institute, directors, members of the technical team, heads of the various security agencies deployed to INEC and all staff of the commission nationwide saying, “I look forward to working with you again.”

Mu’azu, who is the national commissioner in-charge of Tender Board, pledged to diligently handle the affairs of the commission pending the confirmation and resumption of Yakubu for his second tenure.

Mu’azu said that the responsibility handed over to him was not new as all the national commissioners had at one time or the other acted in the capacity of INEC chairman, whenever he was out of the country for official assignment.

“For the last four years, it has been the tradition of the chairman that whenever he is travelling outside the country a national commissioner is assigned in his temporary absence.

“In this way all the national commissioners have at one time or the other acted in the absence of the chairman. We, therefore, see the present arrangement in this light and nothing more.

“I want to assure you all that I will handle the affairs of the commission with all diligence,” Mu’azu said.

Also in his remarks, another commissioner whose tenure ended with that of the chairman, Mr Solomon Soyebi, commended Yakubu’s achievements in his first tenure.

Soyebi encouraged him to continue his good works on his resumption of office in the second tenure.

Oyetola to present 2021 budget to State Assembly on Tuesday