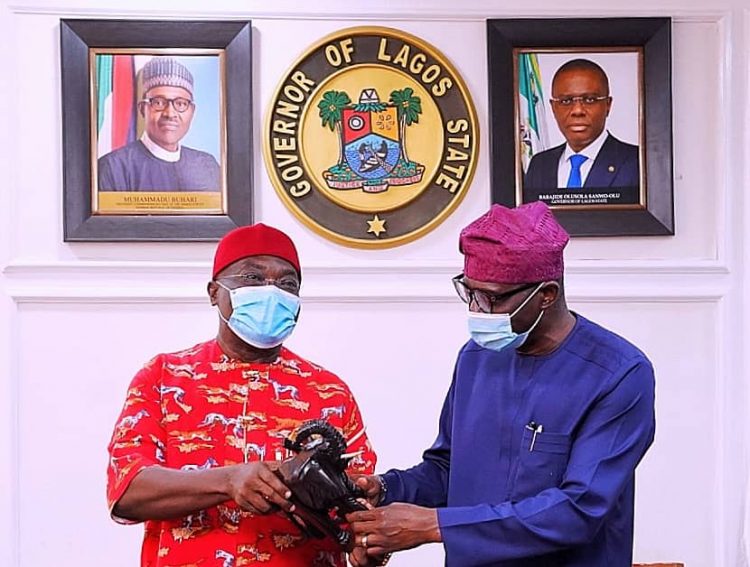 Gov. Okezie Ikpeazu of Abia State on Wednesday paid visit to his Lagos State counterpart, Gov. Babajide Sanwo-Olu to commiserate with him on the destruction in the aftermath of the EndSARS protest in the state.

Speaking at the Lagos House, Ikeja during the visit, Ikpeazu urged youths of the state to show more understanding than they had done in the EndSARS protest that was hijacked by hoodlums,

Ikpeazu urged them to always exercise restraint in their actions and to develop faith in governance and government.

“I am here to commiserate and show my concern to my brother, Governor of Lagos, over the event that happened some two weeks ago.

“I am particularly touched by the level of destruction, which will hurt all Nigerians living in Lagos. This is because Lagos is home to all.

“As commercial city, it is a place where everyone speaks the same language,” the Abia governor said.

He said that the recent events in America showed that not just Nigeria but most countries were challenged.

“So, I seek for better understanding, patience and faith. We are irrevocably committed to ensuring a better future our children, our youths,” Ikpeazu said.

The Abia governor said that his government would work with the leadership of Lagos State and other leaders on projects and programmes that would concern the youth in the country.

Ikpeazu thanked his Lagos State counterpart for protecting the businesses and property owned by Igbos in Lagos during the violence.

“I want to particularly thank Gov. Sanwo-Olu for giving protection to our brothers from the South-East during the crisis. This is an indication that our people and their businesses are safe in Lagos.

“We will continue to live as a united country. With all of us working together, we can keep flourishing,” he said.

The Abia governor urged the Igbo indigenes living in Lagos to continue to abide by the laws of the state and eschew actions that might cause mistrust between them and members of their host communities.

Responding, Sanwo-Olu thanked Ikpeazu for taking the pain to travel down to Lagos from the South-East to identify with the residents over the violence.

He promised that Lagos State Government would continue to support business aspirations of the Igbo and protect their rights to live in Lagos.

The Lagos governor said that the happenings of the past couple of weeks was a clarion call and a reflection of some gaps in governance.

Sanwo-Olu said that the state was on a healing process and would more than ever before engage and collaborate with the youth for a better and stronger Lagos.

NYSC opens camp in Ebonyi with adherence to COVID-19 protocol