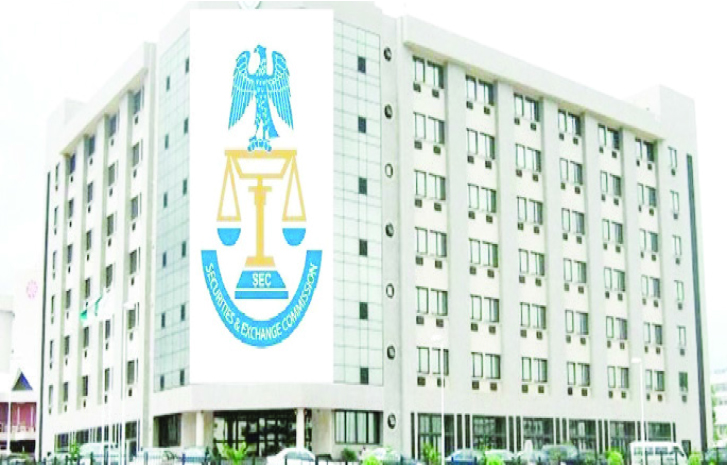 The Securities and Exchange Commission (SEC) on Tuesday urged the Investment and Securities Tribunal in Lagos to make an order freezing all stocks standing to the credit and benefit of a stockbroking firm – First Stockbrokers Ltd.

In an application before the tribunal, SEC claimed that the stocks were acquired with proceeds derived in violation of the provisions of Investment and Securities Act, 2007.

SEC also prayed the tribunal to make an order of forfeiture to the commission, of all stocks standing to the credit and benefit of the first to fifth defendants in the suit, in their respective accounts with the Central Securities and Clearing System Plc. (CSCS).

At the hearing on Tuesday, the claimant’s counsel told the tribunal that the first to fifth defendants were absent and had no legal representative.

He said that former counsel to the first to fifth defendants wrote a letter withdrawing his representation from the case, citing unwillingness of the defendants to defend the case.

He, however, urged the tribunal to proceed with the hearing of the case after proving that hearing notices were given to the defendants.

Counsel to the sixth defendant (CSCS), Mr S. O. Obajaja, also acknowledged that hearing notices were served, saying that the first to fifth defendants might choose to defend the case or not.

In a ruling, the five-man tribunal headed by Dr Abubakar Ahmad granted the application.

The claimant’s counsel called his only witness, Mr Ikechukwu Osuji, who said he worked as an investigator at the Investigation Division of SEC.

The claimant’s counsel said that the witness statement was deposed on oath, and tendered it in evidence.

It was admitted and marked as exhibit.

The counsel also tendered letters from all the complainants which were referred to in the witness’s statement.

The letters were all admitted as exhibits.

He also tendered a letter written to the CSCS which was also admitted.

He urged the tribunal to grant all the prayers in the witness’s statement.

The counsel prayed the tribunal to strike out the name of CSCS from the case since there were no claims against it.

“This is a clear waste of CSCS’s time,” he said.

However, counsel to the claimant re-examined the witness and said that the primary purpose of the case was to freeze certain accounts which were in possession of CSCS.

He also said that he had filed a counter-affidavit in relation to the preliminary objection by CSCS “because there is a clear case against CSCS”.

He said he provided statements to stockbrokers so they could track their investments.

Onwusiwekwu said, “From the search of CSCS’s system, the first, third and fourth defendants have accounts on its records.

“The sixth defendant being a responsible stakeholder in the Nigeria capital market is willing to comply with all lawful directives of the tribunal.”

His statement on oath was tendered and admitted in evidence.

The claimant’s counsel consequently urged the tribunal to close the case of the first to fifth defendants, and asked for a date for filing of written addresses.

The tribunal adjourned until Dec. 11 for adoption of written addresses.

Court fixes Dec. 9 for ruling in “no case submission” of Internet Celebrity, Mompha