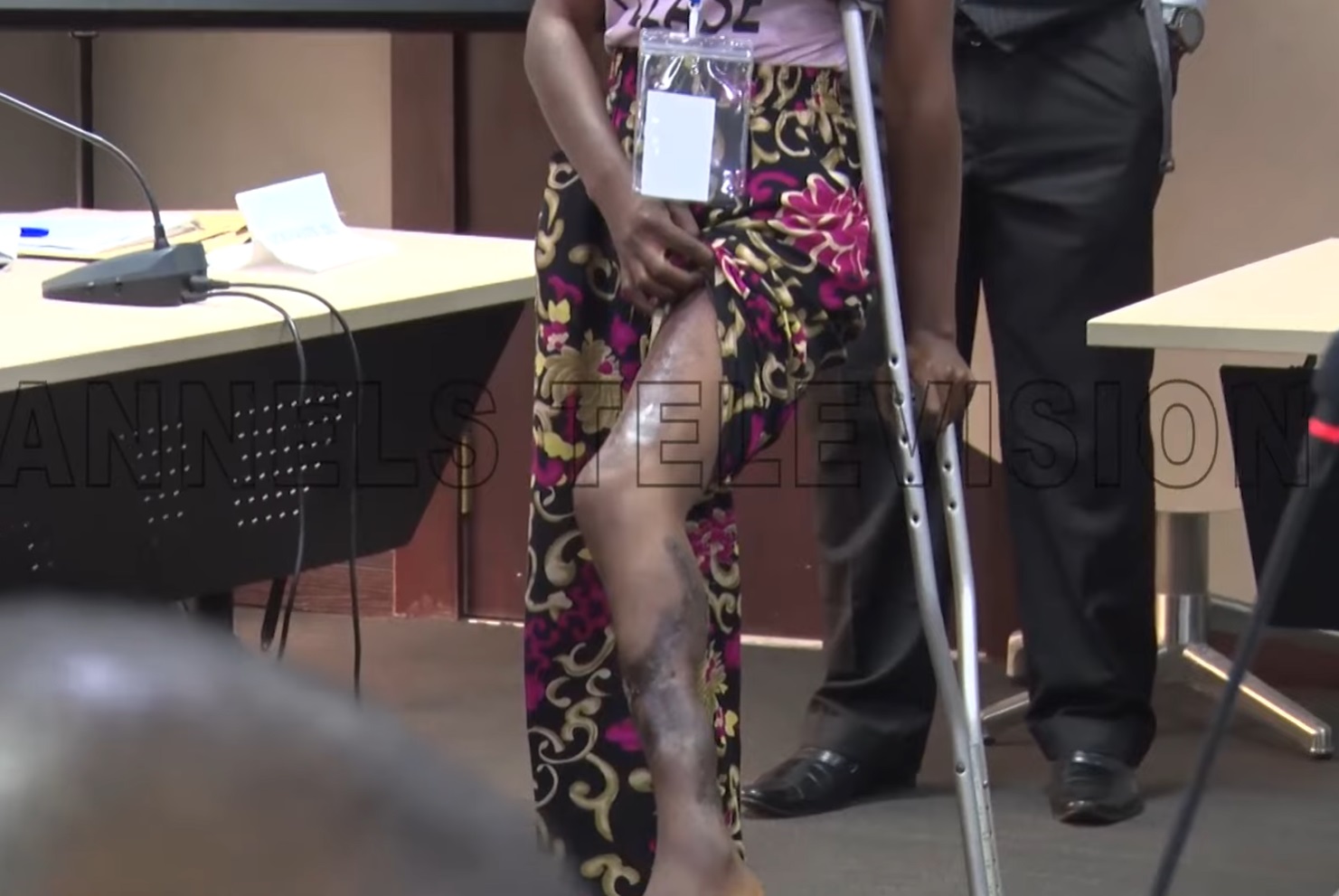 At this point of her testimony…she said she is still in pain and her entire life has since changed, all because of a stray bullet.

It was a moment filled tears and emotions as a petitioner, Mrs. Hannah Olugbodi, a hairstylist who now walks with the aid of crutches, on Saturday told the Lagos #EndSARS Panel how she was hit by a stray bullet on June 6, 2018.

On that date, she returned home from work with her husband and children before collecting money from her husband to buy pepper to make dinner. As she went to the market she heard gunshots.

“I was hit by a stray bullet and I remember passing out, I woke up in a car at LUTH,” she said. “I was in so much pain.”

She said after being given four bags of drip, she realised she couldn’t move her left leg.

The doctor told her that saving the leg was 50/50 and that it could be amputated.

She said four surgeries were recommended.

“The first was to put a metal in the leg, the second was to cut parts of the bone which the bullet had cut to fragments because it wouldn’t survive. The 3rd surgery was a skin graft,” she said.

At this point of her testimony, the petitioner showed the court the extent of her injuries. She said she is still in pain and her entire life has since changed, all because of a stray bullet.

She also testified that she’s not been able to work, feed her children or perform basic chores. Her husband has had to sell his land to pay for her treatments.

She said she spent six months at the Lagos State University Teaching Hospital, LUTH, and no police official visited. She said at a point, the hospital threatened to stop treating her after she ran out of money.

The petitioner presented a lot of hospital bills and documents in support of her case. She also presented photos of her injuries detailing every stage of her surgeries.

According to her, she wrote letters to the Lagos State Government and the Ministry of Justice seeking for assistance and redress but got no response.

The panel admitted the letters in evidence as exhibits.

The witness said she requires further plastic surgery so her legs can be “balanced”.

Under cross-examination by counsel to the police, Joseph Eboseremen, she admitted that she did not write any letter to the Commissioner of Police. The counsel also asked if she has any of the pellets extracted from her leg at LUTH to which she replied, “the bullet scattered my bone.”

And even though she said she has no ballistic report, she was emphatic that the gunshots came from a SARS official.

At the prompting of the police counsel, her husband, Oluwaseun Olugbodi was called to also testify.

He said he heard the gunshots and watched the scene from his balcony. Neighbours then came to tell him his wife had been shot.

He recounted how they went round different hospitals, from the Igbobi Hospital, to the military hospital before they were accepted at LUTH where he was told that his wife’s leg would be amputated if he didn’t provide money for her treatment on time. He said he then ran around family and friends trying to raise money.

On how he knew that it was SARS who shot his wife, the witness said he was told by some hotel staff that the SARS officials came to a nearby hotel where a group of boys were watching football. SARS suspected that these were yahoo boys and when they resisted arrest, the SARS officials shot into the air.

“It was one of those bullets that hit my wife,” he said.

He added that the DPO later confirmed it was Gbagada SARS.

When the police counsel asked if he has any evidence to show that there was any shooting on the day in question, he replied in the negative.

The case was then adjourned to December 8.