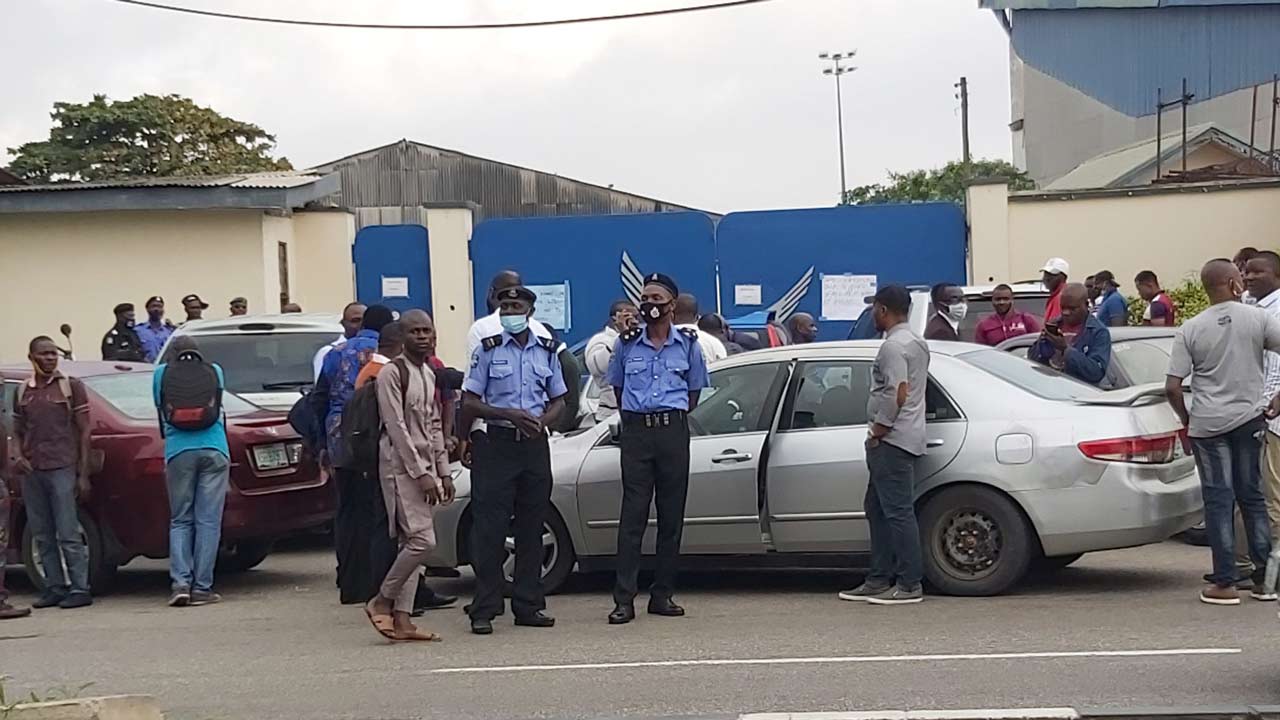 Aviation unions on Friday shutdown operations of Arik Air over alleged refusal of the management to fulfill an agreement on payments of workers’ terminal benefits.

It was reported that the unions, the National Union of Air Transport Employees (NUATE) and Air Transport Senior Staff Services Association of Nigeria (ATSSSAN), blocked the entrance of the airline’s headquarters in Lagos, carrying placards bearing different inscriptions.

Some of the inscriptions read, “End Arik brutality”, and “Sign our condition of service and recall all staff”.

The unions alleged that several members of staff had been furloughed for too long and that pensions were being owed.

Mr Innocent Atasie, ATSSSAN Chairman, Arik Air branch, told our reporter that the issue had lingered for long and promised to continue the strike till all demands were met, as all efforts to resolve the problem had failed.

“The contentious issue is the signing of the conditions of service which we have been negotiating for the past three years. But the only aspect remaining is the severance package.

”We have sought interventions from the Ministry of Aviation, Nigerian Civil Aviation Authority, Ministry of Labour and other stakeholders,” he said.

The chairman said that the unions on Nov. 10, had a joint meeting with NCAA, Ministry of Aviation, Ministry of Labour and stakeholders to find a lasting solution to the lingering crisis between the unions and Arik Air management and that it was agreed at the meeting Arik management would pay a package of basic salary, housing and transportation, as part of workers’ terminal benefits.

According to Atasie, the payment should be made within three weeks to workers earnings above N330,000, while those earning less than N330,000 should be paid within four weeks.

Similarly, he said both parties also mutually agreed, in the presence of all concerned authorities, on the payments for workers retiring, who had attained either 60 years of age or worked for 35 years.

“We, under ATSSSAN, accepted the offer and moved on, only for the management of Arik to call for a meeting on Nov. 19, at which it said it will only pay 58 per cent on terminal benefits to workers against the 100 per cent agreed earlier.

“It was shocking, because we told the management that terminal benefits are not calculated on percentage, but the management refused to yield to reasoning. We held another meeting on Nov. 26, we maintained our position with the management but it refused to shift ground. We are not going back until our demands are met. In most discussions, Arik Air management will always renege,” the union leader said.

Atasie stressed that the management decision to operate with fewer staff was also part of the reasons for the strike.

“The pressure now is that workers at home are now agitating. The flight frequency have increased, we have higher fares and we are opening new routes, so why are you keeping us at home?

“At our last meeting, we demanded that the people at home resume because their absence is contributing to more pressure on us.

“During the pandemic, they were also distributing palliatives to the host community when workers were not happy,” he said.

The chairman said the unions were unhappy disrupting flights and seeing passengers stranded at the airports due to the strike, but that was the only choice they had.

“Our passengers are wonderful people, I appeal for their understanding because we have to do what we are doing”.

In its response, Arik Air apologized to all its passengers whose travel plans had been disrupted by the picketing.

Mr Ola Adebanjo, the Corporate Affairs Manager of the airline, said the management was working on resolving the impasse and assured customers that operations would commence soon, adding that passengers that were affected by the disruptions could still revalidate their flight tickets at no cost.

Meanwhile, Mrs Kemi Adamson, a stranded passenger told NAN that, “I was shocked when l came to the airport at about 7.30a.m. to board and found out that the airline workers were on strike, without due notification. I was forced to buy another ticket from another airline to meet up with my appointment in Abuja.

”Government should sanction Arik Air for not reaching out through text messages or e-mail to customers on the planned strike. I am going to seek refund of my money whenever I’m back to Lagos. Arik Air took customers for granted,” she said.

It was reported that Arik Air had earlier been shutdown on Sept. 14, making this the second time that the airline’s operations would be shut down.