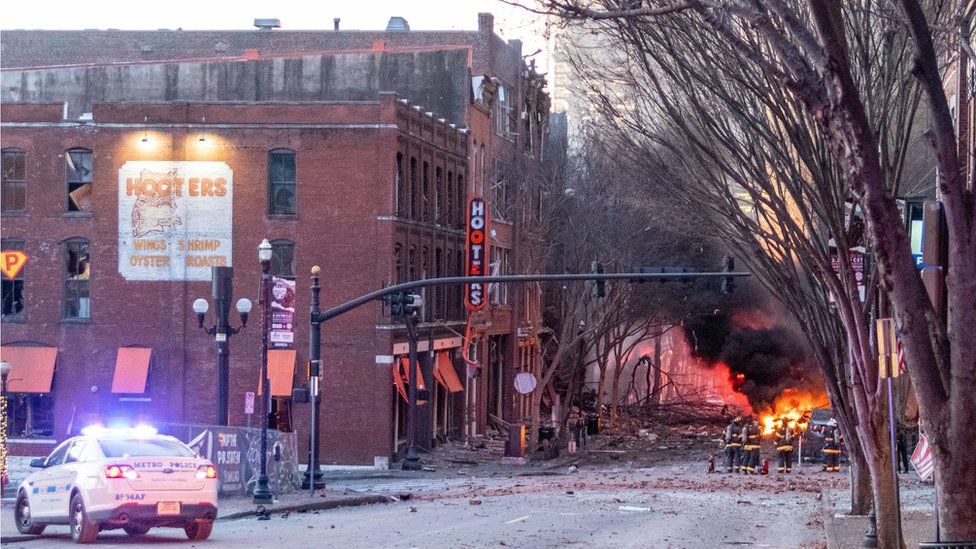 A parked camper van exploded in the US city of Nashville, Tennessee early on Christmas morning, Friday in what police believe to be a deliberate act.

NEWSVERGE reports that officers arrived at the scene shortly after 6.30 am when reports of gunshots filter the air.

Police said the van was broadcasting messages warning it would explode when they arrived. It blew up a bit later.

Three people were injured, none of them critically, and have been taken to hospital, officials said.

Buildings and trees were damaged, and smoke rose above the city centre.

The FBI is leading the investigation. Agents from the Bureau of Alcohol, Tobacco, Firearms and Explosives are also at the scene.

It was not clear whether anyone was inside the vehicle at the time of the explosion, police said.

However, resident Buck McCoy said he was woken up by the blast. He posted a video on Facebook, showing debris and water running down walls, with alarms howling in the background.

“All my windows, every single one of them got blown into the next room. If I had been standing there, it would have been horrible,” Mr McCoy told the Associated Press.

Images from the scene showed blown-out windows, damaged buildings and felled trees. The explosion hit an area of Nashville known for its restaurants and nightlife.

“To this point, we do believe that the explosion was an intentional act,” police spokesman Don Aaron told reporters.

“It looks like a bomb went off,” Nashville Mayor John Cooper said.

Meanwhile, reports have it that President Donald Trump has been briefed on the matter but no tweet have been read from Mr President.