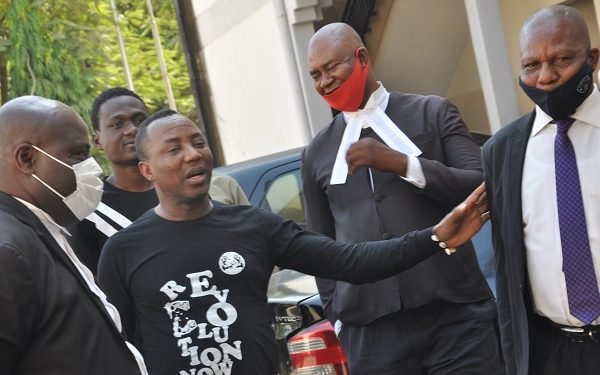 The Nigerian Correctional service, (NCoS) has said that the delay in admission of Omoyele Sowore and four others into the Kuje Medium Custodial centre was due to strict adherence to COVID 19 precautions.

The Controller, FCT command, Mr Abdul-Rahman Maiyaki, said this in a statement by the Command Public Relations Office Chukwuedo Humphrey on Tuesday in Abuja.

Our correspondent reports that a Wuse Zone II Magistrates’ Court, Abuja on Monday, ordered that Omoyele Sowore, publisher of Sahara Reporters and four others be remanded in Kuje Correctional Centre pending hearing of their bail application.

Maiyaki said that it was part of the service’s effort to uphold the Nigeria Centre for Disease Control COVID-19 precautionary compliance.

According to him, NCoS’ Controller General Ja’afar Ahmed was in Kuje medium security custodial centre for his daily routine check when the inmates were brought.

“The controller general gave orders for the inmates to be stood down for the daily fumigation period of the custodial isolation centre to elapse before any new inmate is admitted.

“The command wish to inform the public that the fumigation and sanitisation is to ensure that the pandemic is not contracted within our facility or brought in by newly admitted inmates.

“It is worthy to note that the Service, under the controller general’s leadership has been awarded by several national and international organisations for its zero tolerance and adherence to COVID-19 precautionary guidelines.

“And till date, the service has not recorded any case of the virus in any of our facilities,” he said.

It was reported that the federal government arraigned Sowore and the others on three-count charges of criminal conspiracy, unlawful assembly, and attempting to incite others.

Sowore and the others were arrested by the Special Weapons Tactical Team in Abuja while protesting on new year eve.

Court sentences 2 men to 28 months in prison for theft