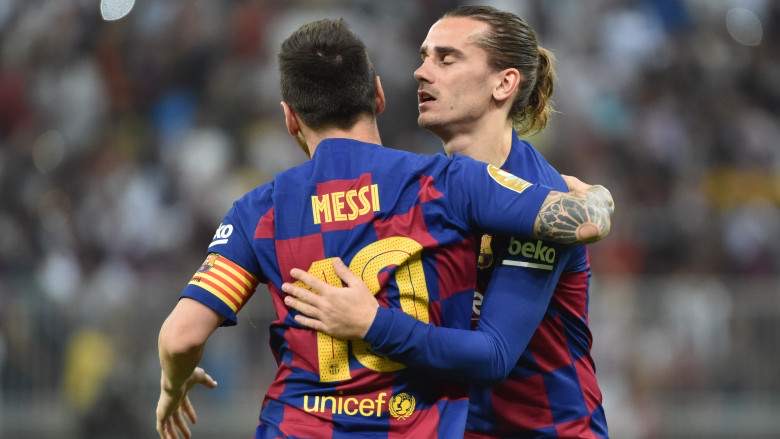 Lionel Messi and Antoine Griezmann each scored twice as FC Barcelona thrashed Granada 4-0 away on Saturday to win a third consecutive La Liga game for the first time this season.

Griezmann opened the scoring in the 12th minute, while Messi struck twice before the break to make it four goals in his last two matches and go top of the league’s scoring charts with 11 goals.

French forward Griezmann scored a classy second goal after half-time while things got worse for Granada.

That was when Jesus Vallejo was sent off in the 78th minute for clattering into Barca substitute Martin Braithwaite.

The victory took Barca back into third place in the standings with 34 points, closing the gap with leaders Atletico Madrid to four points.

However Atletico Madrid, whose game with Athletic Bilbao was postponed due to heavy snow in the Spanish capital, have three matches in hand.

Barca had produced one of their best displays under Ronald Koeman in Wednesday’s 3-2 win at Athletic Bilbao.

But they have tended to struggle for consistency this campaign, in particular away from home.

However, Griezmann got them off to a strong start when he stuck out his leg to prod the ball home.

This was when a deflection from Granada’s Roberto Soldado fell into his path and played him onside.

The Frenchman then went on a marauding run through the middle to tee up Messi, who lashed into the top corner in the 35th minute.

The Argentine struck again shortly before half-time, arrowing low into the net from a free-kick.

He then enjoyed a rare rest when Koeman removed him for Braithwaite midway through the second half.

Griezmann showed his soaring confidence with his brilliant second goal.

He controlled a cross from Ousmane Dembele with his left foot and then used his other foot to find the far bottom corner from a tight angle.