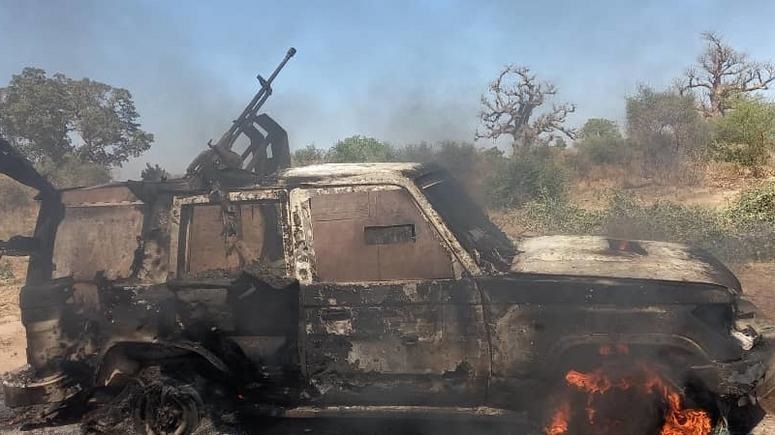 The Defence Headquarters (DHQ), on Thursday denied media reports that terrorists had overrun a military base in Marte Local Government Area (LGA), of Borno between Jan. 15 and Jan. 16.

Maj.-Gen. John Enenche, Coordinator Defence Media Operations, made the clarification, while giving update on military operations in the last one week, aimed at addressing current insecurity challenges across the country.

It was reported that the Boko Haram/Islamic West Africa Province (ISWAP) terrorists, had attempted to attack troops’ location at the outskirts of Marte, but were repelled.

The troops eliminated a number of them and destroyed 13 gun trucks belonging to the terrorists.

Enenche explained: “The story going round as it were that the base (at Marte) was taken over is not true. The attackers came in through one of the check points at a filling station.

“When they came to that check point in order to attack, the troops there had to do what we call tactical withdrawal.

“That tactical withdrawal is to move away so that they (terrorists) can now go into the killing ground.

“At times, we have to pull out and draw them into the killing ground, that is what we did and it achieved result. When you do that (tactical withdrawal), you now call for air support.

“Several of them were killed; 13 gun trucks were destroyed at the end of the day.’’

The coordinator added that the capabilities of the insurgents in the North East were being degraded as they no longer had freedom of action within the theatre of operation.

He said that an illegal refining site at Egwa Creek in Warri South West Local Government of Area of Delta, was de-activated by the Nigerian Navy.

During the period under review in the North West, Enenche said that troops of Operation Hadarin Daji neutralised 35 bandits and recovered 24 rustled cows and unspecified number of sheep.

In the North Central, Enenche said that troops arrested two suspects in Plateau and recovered one locally fabricated AK47 rife from them, one in Kaduna State and one suspected kidnapper in Nasarawa State.