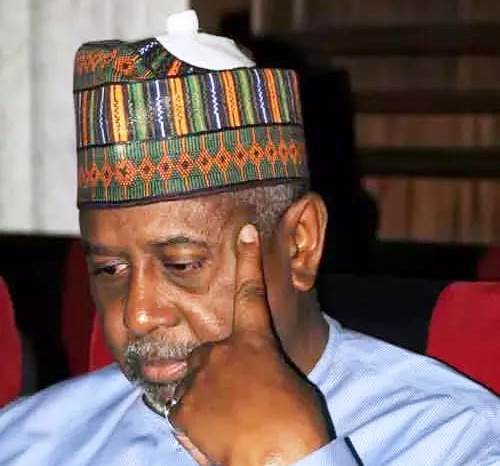 Counsel to the Federal Government, Ladipo Okpeseyi, SAN, told Justice Ahmed Mohammed of the Federal High Court, Abuja, that Obiora could not make it to court because the vehicle with which he was traveling down to Abuja from the east broke down.

The lawyer, who apologised to the court, said he had discussed the unfortunate incident with Dasuki’s counsel, Ahmed Raji, SAN.

“The matter today is for continuation of trial; for the defence to cross examine the PW1 or conclude the cross examination.

“We have just been informed in court now that the vehicle conveying the witness to Abuja is broken down on the way from the eastern part of the country.

“I learned he had retired and gone back home. I have explained to my learned counsel our challenge and we agreed for an adjournment to conclude the cross examination of PW1 before any one else.

“We apologise for this. This is totally beyond our control,” he said.

Raji, who confirmed the submission, did not oppose the application.

Justice Mohammed adjourned the matter until March 30 and March 31 for trial continuation.

It was reported that on March 11, 2020, Obiora, who retired in 2018 as Department of State Service (DSS) officer, had told the court that he was part of the team that carried out a search at the ex-NSA’s residence in Asokoro where fire arms were discovered.

Dasuki, who was the NSA in the administration of former President Goodluck Jonathan, is facing a seven-count charge bordering on illegal possession of fire arms and money laundering.