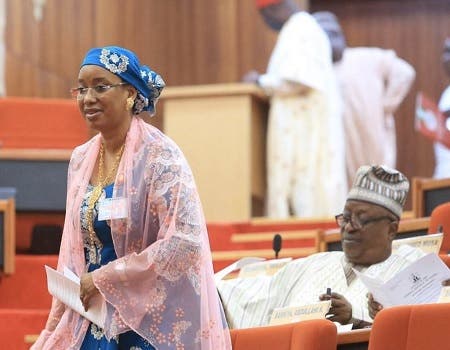 The Senate on Thursday at plenary resolved to check revenue leakages from medical tourism with passing of a bill to reduce number of Nigerians traveling to other countries for medical care.

Leading debate on the bill, Ahmed said the absence of a legal framework for the regulation, development and management of Federal Medical Centers (FMCs) to set standards for rendering health services was responsible for hindering the provision of intensive, effective and efficient healthcare services to the people of Nigeria.

According to her, the measure has led to a number of challenges in the health sector, including under-funding, weak facilities and infrastructure, poor motivation of health workers and low budget.

Others were weak accountability, conflicts with the political structure of the states and industrial strikes which has led to inadequacies, shortcomings and weaknesses which hindered effective healthcare delivery services.

She noted that the passage of the bill would reduce the number of Nigerians traveling to other countries for medical care.

She regretted that an average of 20,000 Nigerians traveled to India each year for medical assistance due to the absence of a solid healthcare system at home.

Ahmed further noted that the bill would also sufficiently address remuneration of employees of the FMCs and check the exodus of doctors and nurses to other countries.

“Seventy seven per cent of black doctors in the US are Nigerians and there is rarely any top medical institution in the US or Europe where you don’t find Nigerians managing at the top level.

“Hardly a year passes without a major national strike by nurses, doctors or health consultants. The major reasons for these strikes are poor salaries and lack of government investment in the health sector,” she said.

Citing a report of the United Nations International Children’s Emergency Fund (UNICEF), Ahmed stressed that the bill would “improve on the persistent rate of avoidable deaths of all Nigerians”.

“A recent UNICEF report has it that preventable or treatable diseases such as malaria, pneumonia, diarrhea, measles and HIV/AIDS account for more than 70 per cent of the estimated one million under-five deaths in Nigeria,” she said.

She added that with the right data, Nigeria would witness improvements in the health information system, regular and sustainable population and health-facility-based surveys; as well as have a centralised management of the many challenges of the 23 FMCs in the country.

Contributing to the debate, Sen. Yahaya Oloriegbe (APC-Kwara Central) said FMCs were incapacitated as a result of the absence of legal backing establishing them and insufficient funding.

“We have about 23 FMCs established across the country but without legal backing.

“The consequence of such is that there are what I will call policy somersault as regards the operations of these centres.

“You see, some of the centres that have enough facilities and manpower to even be termed a Teaching Hospital, but because the legal framework did not state the standard in terms of infrastructure, manpower and services, they remain like that at the whims and caprices of the policy makers in the Federal Ministry of Health.

On his part, Sen. Ibn Na’Allah said the bill was timely as it sought to ensure that all institutions of government were governed by law.

“We cannot continue to operate a democracy where public funds are disbursed to institutions that are not recognised by law, that is not right,” Na’Allah added.

The bill, after scaling Second Reading, was referred by the Senate President, Ahmad Lawan, to the Committee on Health for further legislative work.

The committee, chaired by Sen. Ibrahim Oloriegbe, is expected to report back to plenary in four weeks.