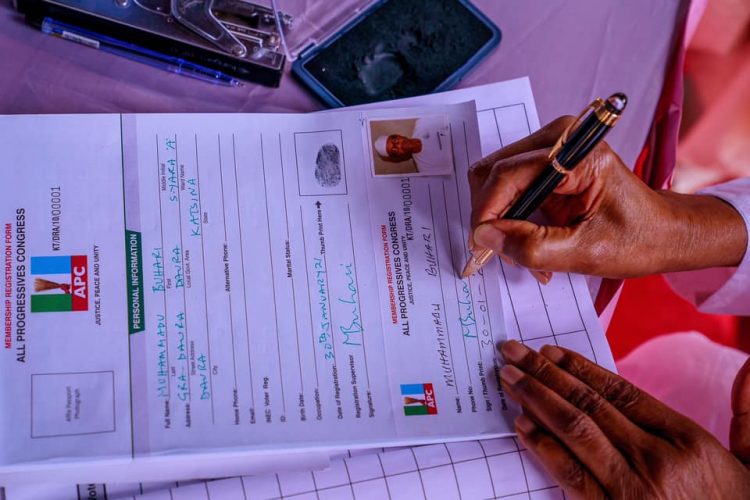 The All Progressive Congress (APC) says it is targeting no fewer than 100,000 new registrants per Local Government Area in Enugu State in the ongoing nationwide APC Registration and Revalidation.

It was reported that the ongoing nationwide APC Registration and Revalidation have entered its second week.

Chief Hycienth Ngwu, a former South-East Publicity Secretary of the APC, disclosed this to NAN on Monday after monitoring the ongoing exercise in some centres in Enugu South Local Government Area in the state.

Ngwu noted that at the end of the exercise at least a total of 1.7 million residents of the state must have registered in the ruling party.

According to him, the exercise is going on smoothly and seamless in centres monitored so far.

“We are leaving no stone unturned and the APC has started massive use of public address system to mobilize the local residents in each of the council areas to come out en mass for the exercise.

“Some of our party faithful in the council and ward levels have started house-to-house and interpersonal level contact and engagement to convince our people to join the progressive party en mass.

“Just recently, I received credible information that 195 residents of my polling booth, booth 021, ward 1 in Amaechi Awkwunanaw community within Enugu South council area had so far registered within my polling booth alone.

“This shows we are gradually taking over polling booths in the state and we will continue until APC becomes the dominant party in Enugu State and by extension the South-East,” he said.

Ngwu said that the South-East had benefited a lot in the five years rule of APC more than the 15 years of PDP-led government.

He said that the recent modernisation and upgrading of facilities at the Akanu Ibiam International Airport, Enugu, further confirms the commitment the Buhari-led administration had invested in the zone.

“The ongoing 2nd Niger Bridge and rehabilitation of most of the federal roads, which were abandoned by successive governments, are worth our appreciation of a performing party.

“We also will like to commend the President for the establishment of Zone 13 Police Headquarters in Anambra and the creation of National Force CID Annex in Enugu to further enhance security within the zone,” he said.

The former APC spokesman said that these achievements and sterling qualities had made large retinue of prominent people decamping from PDP to APC in the South-East.

“We are still expecting more people in the APC progressive train as we enlighten more of our people of the inherent benefit of supporting the APC especially as we forge forward for a President of Igbo extraction,” he added.