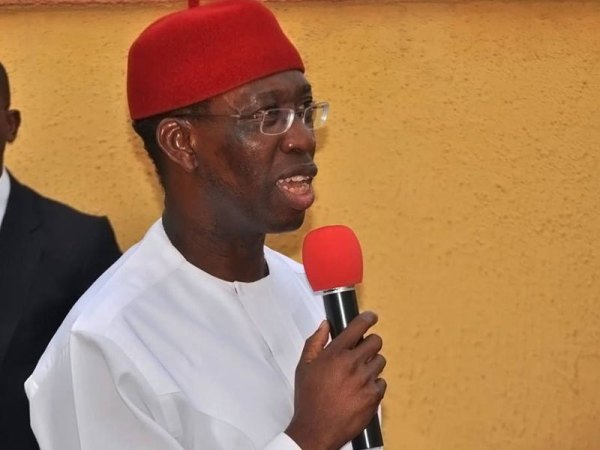 The Delta Government on Thursday disclosed that it would inaugurate the Ovwor-Olomu-Effurun-Otor Bridge in Ughelli South Local Government Area, on Tuesday, March 16.﻿

Mr Charles Aniagwu, the Commissioner for Information, made this disclosure to newsmen shortly after inspecting the project at Effurun-Otor.

He said that the project would be inaugurated by Gov. Ifeanyi Okowa, who would be accompanied by his Edo counterpart, Mr Godwin Obaseki.

“We are happy that in about five days from now, these projects will be inaugurated by Gov. Okowa, in company with Gov. Obaseki, for the use of our people and the good of humanity”.

Aniagwu also inspected the rehabilitation and re-sealing of Otu-Jeremi-Okwagbe Road and the construction of Okwagbe-Otutuama-Esaba Road Phase 1, all in Ughelli South LGA.

He said that the state government was happy with the successful completion of the bridge and the use of indigenous contractors.

“Ahead of the inauguration of the projects, we have come to look at the readiness of the contractors to welcome Gov. Okowa.

“Going round these projects, I can tell you that I am immensely proud of being a member of this government, “he said.

Aniagwu said that he was proud to see that indigenous contractors were able to deliver quality work like their foreign counterparts and in good time too.

He said further that the use of local contractors had also reduced capital burden because majority of the workforce engaged by the indigenous companies were Nigerians and majority of them were citizens of Delta.

“The more we engage these qualified indigenous contractors the more we are able to build capacity to compete even within and outside the shores of Nigeria.

“The more projects they execute, the more funds available to them to purchase machinery and able to train their staff to international standard,” he said.

The commissioner also commended the Ughelli South Council Chairman, Dr Richard Kofi, for using youths trained under the council’s skill acquisition programme to execute the interlocking of the internal roads within the council’s secretariat.

“You will recall that over 6,000 youths of Delta have been trained in various skills and given starter-packs to become entrepreneurs.

“What Kofi has done here is in line with our prosperity mantra and local content initiative,” he said.

Responding, Kofi who conducted the commissioner round the council premises said his administration targeted the training of 3,000 people but was able to train 850 in interlocking, bag and shoe making.