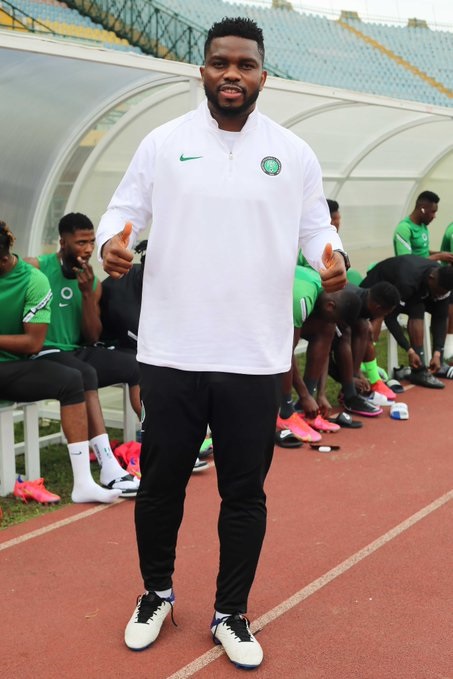 The newly appointed Super Eagle assistant coach, Joseph Yobo is set to debut his assignment this week as the team in high spirit for 2002 African Cup of Nations (AFCON) qualifier.

The 39-year-old will work with manager Gernot Rohr and replaces Imama Amapakabo in the technical crew, according to the Nigeria Football Federation (NFF).

OTD IN 2001.Asst. Coach @jyobo234 debuted for the @NGSuperEagles in a 2002 Afcon qualifier vs Zambia.
The former skipper played 101 matches for Nigeria. He scored 7 goals vs 7 different opponents. His time with the team spanned 15 years. He was part of the 2013 AFCON winning team pic.twitter.com/LYsftmRD4C

His time with the team spanned 15 years and was part of the 2013 AFCON winning team.

His country’s second most capped player, Yobo won the first of his 100 caps for Nigeria against Zambia in Chingola in 2001.

Yobo, who represented his country at the 1999 Under-20 World Cup, skippered the Super Eagles to Africa Cup of Nations success in South Africa in 2013.

The former Everton, Fenerbahce and Norwich City defender played in six Africa Cup of Nations tournaments between 2002 and 2013 in a 14-year career.

He featured in three World Cup tournaments in 2002, 2010 and 2014, playing ten matches at the World Cup finals in total – the most appearances for the West African nation on the biggest stage.

Yobo became the first African to captain Everton in October 2007 and made more than 250 appearances for the Toffees, helping them qualify for the Champions League in 2005 and playing in the side that lost the 2009 FA Cup final to Chelsea.