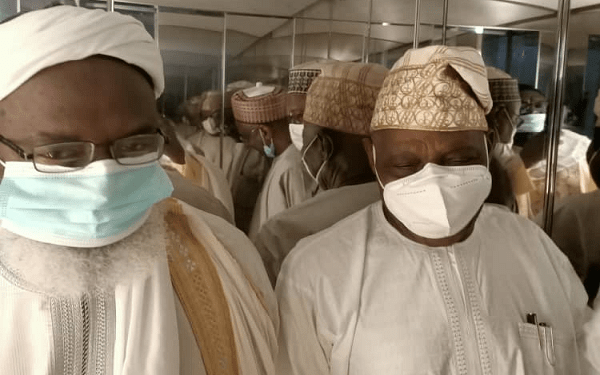 Former President Olusegun Obasanjo and popular Islamic scholar, Sheikh Abubakar Gumi, met on Sunday to discuss and propose possible solutions to the security challenges in Nigeria. The meeting, which held at the residence of the former president in Abeokuta, the Ogun State capital, was part of efforts to find solutions to the menace of banditry, kidnapping, and payment of ransom, among other security threats in the land.

After the exchange of pleasantries, Gumi briefed Obasanjo on measures and steps he had taken to stem the tide of insecurity in many parts of the North. Discussions centred on the causes, effects and implications of the various security threats, as well as the reactions by communities, local authorities, state governments, and the Federal Government, as well as authorities in neighbouring countries and nations within West Africa.

In their resolution, Obasanjo and Gumi agreed that banditry, kidnapping, and other crimes that have led to general insecurity were a nationwide phenomenon. They acknowledged that people from various parts of the country and outside Nigeria were involved, although some people were more predominantly involved than others.

The elder statesman and the Islamic scholar appealed to authorities and the people not to encourage or support criminality, noting that the security situation in the country has gone beyond tolerance.

They identified the crisis as a micro-ethnic conflict between the Fulani and many host communities mainly in the North West, saying its remote causes were educational and economic disparities, as well as the negative use of religion and ethnicity by deceitful politicians.

On how to tackle the menace, Obasanjo and Gumi stressed the need for the people, irrespective of their affiliation, to desist from blame game, as well as attributing ethnicity, religion, and region to crimes committed by criminals.

They also called on the people to respect one another, show tolerance and accommodation where necessary, as well as condemn criminal acts no matter where it was committed and by whom it was committed.

According to them, encouraging more carrot solution as may be found necessary, sharing information at all levels, and not accepting criminality as a way of life for any individual or group in the country, are part of the solutions to insecurity in the land. A screengrab taken on April 4, 2021, shows former President Olusegun Obasanjo and Sheikh Abubakar Gumi during a meeting held at the residence of the elder statesman in Abeokuta, the Ogun State capital.

Read the statement jointly signed by the former president and the Islamic scholar below:

After the exchange of pleasantries, Sheikh Gumi briefed Chief Obasanjo with other hosts on the measures and steps he had taken and spearheaded to stem the tide of insecurity and menace of banditry, kidnapping and ransom payment in many parts of the North.

Questions and discussions ensued to clarify some statements credited to Sheikh Gumi on his well-intended mission in the past. After clarification of points by Sheikh Gumi, discussions centred on causes – remote and immediate –, effects and implications, actions and reactions by communities, local authorities, state governments, national government and governments of our neighbouring countries and countries within West Africa.

After deep, frank, and intimate discussions, the following points were arrived at and decided upon for appropriate actions as recommended: Chief Obasanjo commended Sheikh Gumi for his initiative and encouraged him not to relent in his efforts. Sheikh Gumi thanked Chief Obasanjo for his past services, emphasising the special unifying efforts and attributes to the nation and for the warm welcome accorded to his delegation.

The menace of banditry, kidnapping, other crimes, and atrocities leading to general insecurity is a nationwide phenomenon. We acknowledge that people from different parts of the country and outside the country are involved although some people are more predominantly involved than others.

We must not advertently or inadvertently, in words, action or inaction encourage or support criminality. We acknowledge that the security situation has gone beyond tolerance; hence Sheik Gumi’s coming to Abeokuta to confer with Chief Olusegun Obasanjo.

We identified the crisis as micro-ethnic conflict between the Fulani and many host communities mainly in the North West. We identified the remote causes as educational and economic disparities, and the negative use of religion and ethnicity by unscrupulous politicians. Solutions must be seen and provided on short-, medium-, and long-term bases and must be composed of stick and carrot for the offender and the vulnerable.

Since the end of the civil war, the military is the strongest and most potent instrument and symbol of national unity that we have, and we must keep it so. State governments must have adequate means of providing security for their people and as chief executives and chief security officers of their states, they must have the means at their disposal to ensure security for all within their states.

Federal Government must be proactive, secure necessary and updated intelligence to deal with organised crimes and have a common policy for the nation. It is not solving the problem when one state goes for negotiation and molly-cuddling of criminals and another one goes for shooting them. Nor should one state go for ransom payment and another one going against.

Education is one main key to solve the problem in the long run, but it must start now. The 14 million children that should be in school and are out of school must be put in school with local authorities, state governments, and federal government working together.

Wean those who are ready to be weaned out of the bushes and crime, settle and rehabilitate them, give them skills, empower them and let them have employment. The hardened criminals must be hard hit with the stick. Unlawful carrying of arms should be very seriously punished. Federal Government should take the issue up seriously within ECOWAS to work for a regional solution.

Every community must be encouraged and empowered to stand firm and strong against criminals. There should be protection and reward covertly for whistleblowers against criminals living in the community. Special courts should be created to deal promptly with cases of banditry, kidnapping, ransom demanding and unlawful carrying of weapons. Let the slogan be: Security is the responsibility of all Nigerians.

We agree to continue to work together for solutions for the security of Nigeria and to seek others to join us as we widely circulate our joint statement. To this end, Sheik Gumi has extended an invitation to Chief Obasanjo to visit Kaduna with a view to continuing the discourse started today and Chief Obasanjo has graciously accepted.

We conclude that to keep Nigeria safe and secure for all Nigerians and others living in Nigeria is a task that all well-meaning Nigerians must engage in, separately and collectively. Both of us resolve that we would not relent in our efforts. The delegations on both sides acceded to this statement. We agree to meet again in due course to re-examine the progress and situation of security in Nigeria.