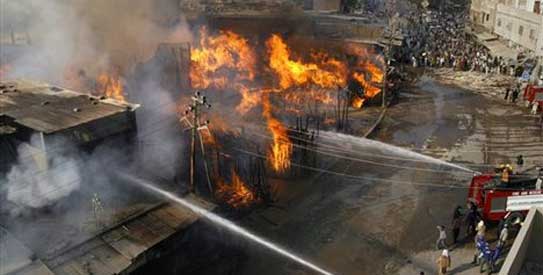 No fewer than 40 victims of the Oro Central Market fire outbreak in lrepodun Local Government Area of Kwara have appealed to the state government for financial support to resuscitate their businesses.

Mrs Mulikat Jimoh, the lyaloja of Oro central market, made the appeal in an interview with our reporter in llorin on Monday.

Recall that about 30 shops were gutted by fire at the Oro central market on April 12, where yams and slaughtered animals worth millions of naira were destroyed.

Jimoh, who also appealed to kind hearted Nigerians to come to their aid, said that the inferno wrecked havoc on goods.

According to her, the over 40 affected traders, mainly butchers and yam sellers, are facing economic hardship as they are incapacitated to engage in any business after the incident.

She said that the affected traders, including able bodied men, are currently idle and unable to access capital from any source to commence a new business.

The lyaloja however expressed gratitude to Gov. AbfulRahman AbdulRasaq for his on the spot assessment of the market and solicited for immediate succour for all the affected traders.

Mrs Rofiat Bashorun, a racer at the market who sold palm oil, rice and assorted materials said she lost about N250,000 to the inferno.

Another trader, Mrs Atilola Bolanle, said she lost over N70,000 worth of goods to the fire and also appealed for financial support from the government.

Similarly, Alhaji lbrahim Babatunde, a butcher, lamented that he lost over N50,000 to the fire outbreak.

Minister to meet with experts rail track along Apapa corridor