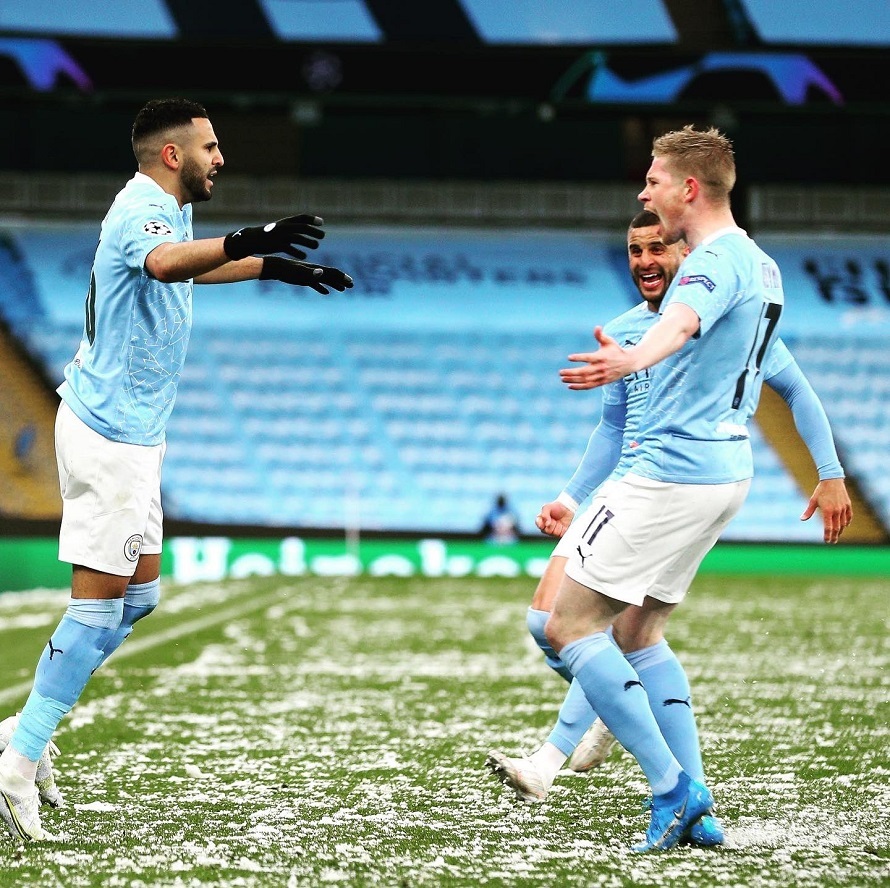 Manchester City reached the Champions League final for the first time in the club’s history as Riyad Mahrez’s double saw off Paris Saint-Germain 2-0 on Tuesday to seal a 4-1 aggregate win.

Mahrez’s goal also decided the first leg and the Algerian, who grew up in the Parisian suburbs, haunted his home town team again with two clinical finishes early in each half.

The final in Istanbul on May 29 against Real Madrid or Chelsea is the culmination of City’s rise since an Abu Dhabi takeover in 2008 transformed the club’s fortunes.

Meanwhile, four years on from making Neymar and Kylian Mbappe the world’s two most expensive players, PSG’s wait for a first Champions League title goes on.

Mbappe could only watch on from the stands due to a calf injury as, just like in last week’s first leg, his side imploded after an excellent first-half performance.

The visitors were left to rue huge missed chances by Marquinhos and Angel Di Maria in between Mahrez’s strikes before Di Maria lashed out at Fernandinho to leave PSG down to 10 men for the final 20 minutes.

City will set the seal on a fifth Premier League title in the past 10 years in the coming days as they remain on course for a treble, having already lifted the League Cup.

But it has taken until their 10th consecutive season in the Champions League for Sheikh Mansour’s investment to be rewarded by playing in the biggest game in club football.

City boss Pep Guardiola has won the Champions League twice before as a coach during his time at Barcelona.

However, the Catalan has also endured a decade of anguish in Europe’s premier club competition since.

Four times Guardiola has fallen at the semifinal stage with Barca and Bayern Munich since last lifting the trophy in 2011 on top of three quarterfinal exits with City in the past three seasons.

In many of those ties, the fine details and controversial decisions went against Guardiola’s men despite dominating the match.

This time it was a role reversal as City had to withstand a barrage from PSG before the break.

The French champions thought they had an early penalty to get back in the tie when Oleksandr Zinchenko was penalised for handball.

However, Dutch referee Bjorn Kuipers rightly reversed his initial decision on seeing a replay of the ball bouncing off the Ukrainian’s shoulder.

Zinchenko was heavily involved again when the opening goal arrived at the other end.

He raced onto City goalkeeper Ederson’s thunderous long pass into the PSG area. Zinchenko’s cut-back found Kevin De Bruyne and after the Belgian’s shot was blocked, Mahrez pounced to slot home on his weaker right foot.

The tie was still far from over as PSG penned City back and should have been at least level on the night before halftime.

Marquinhos has made a habit of scoring big Champions League goals and the Brazilian was inches away from another when his looping header came back off the crossbar.

Ederson then nearly undid his good work as Di Maria intercepted his hurried throw to Bernardo Silva and flashed a shot inches wide with the Brazilian ‘keeper stranded outside his goal.