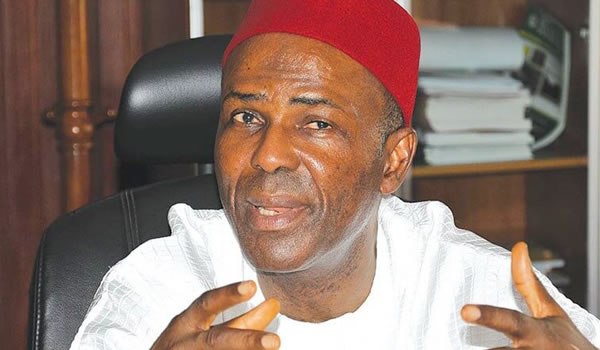 Onu made the remarks during a National stakeholders Sensitisation and Awareness workshop, on Tuesday, in Abuja.

It was reported that the theme of the workshop is, “Animal Biotechnology Applications and Regulatory perspectives”.

The workshop was organised by the National Biotechnology Development Agency (NABDA) in collaboration with other stakeholders.

The minister stated that the Federal Government has apportioned almost half of the nation’s GDP to the science and technology ecosystem.

“This will go a long way to improve agricultural sectors, create job opportunities and improve the economy,” he said.

Onu also called on the participants to come up with policies that will strengthen and advance the Biotechnology sector.

He charged NABDA with the responsibility of finding practical solutions to the problems between animals and farmers in the country which posed as a threat to animal biotechnology.

“This workshop will provide an opportunity for you to discuss important issues affecting animal agriculture in Nigeria and finding practical solutions to them.

“These solutions will not only be beneficial for Nigeria but for Africa and the world at large,” he said.

Prof. Abdullahi Mustapha, the Director-General (D-G) of NABDA, had earlier said that the event was informed by the need to see how Nigeria could leverage on innovations in Biotechnology which is known as genome editing.

It was reported that Genome editing (also known as gene editing) is a “method that lets scientists use different technologies to alter the DNA of many organisms, including plants, bacteria, and animals.

It is aimed at improving growth and quality in food and animal production.

The D-G said “the workshop will inform participants about innovations and developments in Biotechnology and speed up adoptions and applications of these technologies, as a country to advance the sector.”

In his keynote address, Mr Sabo Nanono, the Minister of Agriculture and Rural development, emphasised the need for participants to exchange ideas on how the country could adopt innovations in the biotechnology sector.

Nanono who was represented by Mrs Winnie Solarin, the Director of Animal Husbandry, charged participants to brainstorm and come up with ideas that would sustain institutional linkages in the sector.

He urged participants to factor-in the role of healthy plants in animal biotechnology and look at ways private sector investments could be leveraged on.

It was reported that other speakers include, Dr Rufus Ebegba, the D-G National Biosafety Management Agency (NBMA); Dr Margaret Karembu from the International Service for the Acquisition of Agri-biotech Applications (ISAAA) AfriCentre, Kenya.

The rest are Prof. Ikenna Omeje from Delta State University (DELSU) and stakeholders from different parts of the world.