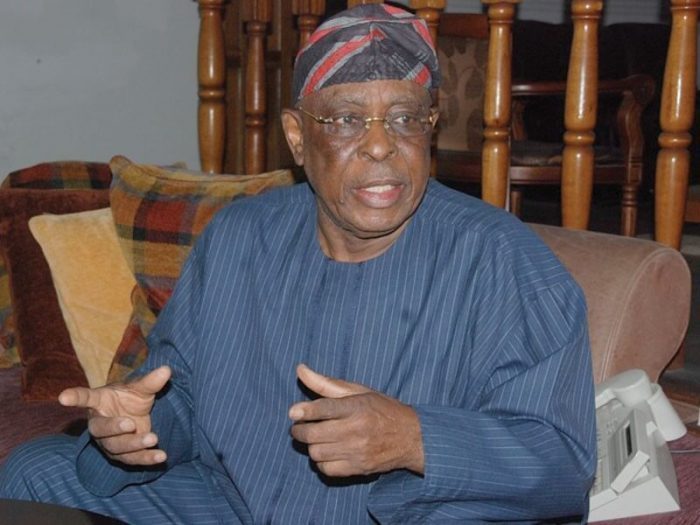 Former Gov. Olusegun Osoba of Ogun, on Tuesday narrated his many years of adversity from the two immediate past administrations after him in the state.

Osoba spoke in Abeokuta at the inauguration of a press centre named after him by the state government.

It was reported that Osoba served as Governor of Ogun between 1999 and 2003.

He said: “The first 16 years of my leaving this office has been very traumatic.

“I never came back as I became a snake that doesn’t go back to where it has shed its skin.

“This premises became a no-go -area for me, and every symbol of the projects that I did was removed.”

According to him, in the first eight years, I was practically declared persona non grata in Ogun.

“My name was sent to EFCC so many times and the agency investigated me severally, but found nothing.

“I couldn’t come to Abeokuta, not to talk of visiting the office of the governor.

“The other eight years were also problematic,” he narrated.

Osoba described Gov. Dapo Abiodun as “a governor of redemption and restoration”.

He said the governor had reminded him of agonising old memories and turned them to joyful memories.

“To imagine that my returning to this premises after those years will be this glorious, is something of great emotion for me.

“Mr Governor, you will not know how many hours you have added to my life with this action today.

“It may be hours, it may be weeks, days, and it may be years, but you have added something very great to my life today,” he said.

In his remarks, Abiodun described Osoba as “an encyclopaedia and a veteran journalists”, adding that his administration could not think of any other personality who deserved the honour more than him.

“Chief Osoba is a statement, a respectable icon in the pen pushing profession, and he also symbolises the birth place of the first newspapers in Nigeria, established in 1859,” he said.

The governor said that Osoba had led three major newspapers in Nigeria namely; the Daily Times, the Herald and the Daily Sketch.

He said that Osoba was noted for a unique brand of investigative journalism saying, “he is a brand ambassador of Ogun”.

Abiodun said that the establishment of the press centre had become necessary to enhance the speed and quality of stories of journalists in the state.

He urged the journalists to ensure that they were fair and continue to be responsible in their news reportage, urging them to seek to protect the integrity of the nation.

Commenting, Mr Bayo Onanuga, a former Managing Director of NAN, said that Osoba occupied an enviable height in the journalism profession, adding that he deserved such honour.

Onanuga while describing the project as “a promise kept”, recalled that Abiodun had pledged to build a press centre when he assumed office.

It was reported that the edifice is located directly opposite the Governor’s office inside the state Secretariat at Oke-Mosan.