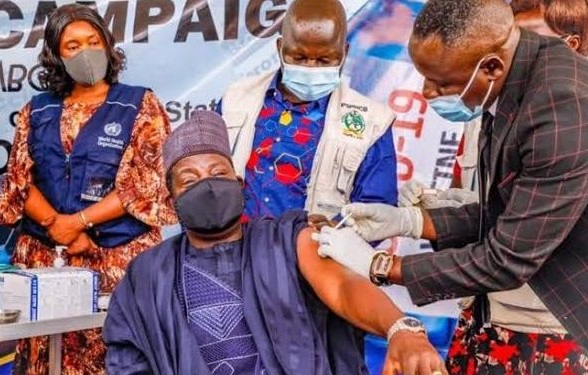 Speaking after taking the jab, the governor said that fatal cases of COVID-19 disease is decreasing in the country as a result of the mass vaccination.

He said he flagged off of the second phase of the vaccination to encourage the people to get the vaccine. He dispelled the myths surrounding the vaccine.

“People are waiting for the governor to Flag off the vaccine, so I have flagged it off and you are encouraged to do same.

“Our prayer is that COVID-19 will soon leave Nigeria and the world,” he said.

He assured Plateau residents that in spite of the challenges being experienced in the supply of vaccines globally, the state has enough to go round.

The governor said that the vaccination is becoming a prerequisite for international travels, saying “You cannot travel out without the vaccine, especially for religious pilgrimages.”

Earlier in his remarks, the Executive Secretary of Plateau State Primary Health Care Development Agency, Dr. Livinus Miapkwap, said the waiting period to receive the second jab of the vaccine has been reviewed as a result of innovations in researches.

He said that the period between the first and second jabs has been reviewed downwards from two to three months to six to 12 weeks.

He said the governor who got his first jab on March 15 was therefore eligible for the second jab, saying 17 centres have been designated for the mass vaccination in the state.

He explained that people who got their vaccines from other parts of the state or outside the state, can go to any centre closest to them, saying there was no need for them to go to distant places to get the jab.

Miapkwap said that the first jab would also be administered for those who have not received, saying the exercise would go on concurrently with the second jab administration.

Also speaking, the commissioner for information, Mr. Dan Manjang, urged the people to take the exercise with all seriousness, saying Lalong demonstrated the leadership by taking the second jab to assure the people of its efficacy and safety.