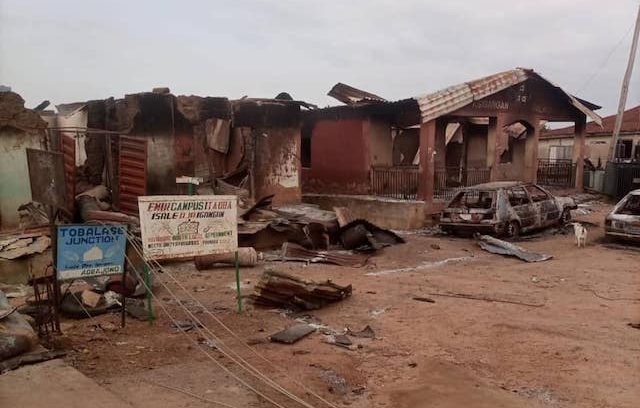 No fewer than 20 people have reportedly died in Igangan in Ibara pa North Local Government area of Oyo State when scores of bandits on motorcycles stormed the sleepy town late at night.

The attack was carried out just after a week that the Chairman of Amotekun Corps in Oyo State, General Ajibola Togun (rtd) warned that some foreign herders were hibernating in forest reserves waiting to unleash terror on Yorubaland.

Eyewitness confirmed that the killing was carried out by Fulani herder reacting over the killing of their cows along with the decision of the Southern governors over open grazing.

It was also gathered that not more than 20 indigenes were allegedly killed, while Asigangan’s palace was partially razed and a filing station by the suspected herders, reported to be 50 in number that invaded the town in more than 20 motorcycles.

Meanwhile, the Governor of Oyo State, ‘Seyi Makinde has urged residents of the state to remain calm, saying that the security operatives are in control of the situation. According to Makinde on his Facebook page he noted that he received the news of the attack on residents very early on Sunday morning.

Makinde said: “I have received the shocking news of the attacks on residents of Igangan, Ibarapaland, in the early hours of this morning.”

“I am currently being briefed on the incidents. I urge residents to remain calm as security operatives are now in control of the situation.” Public Relations Officer of the State Police Command Mr Adewale Osifeso, when contacted promised to provide details of the incident soonest.

He is yet to provide the details when this story was filled. Igangan crisis: Makinde sues for peace, calm as CP, govt officials comb trouble spots