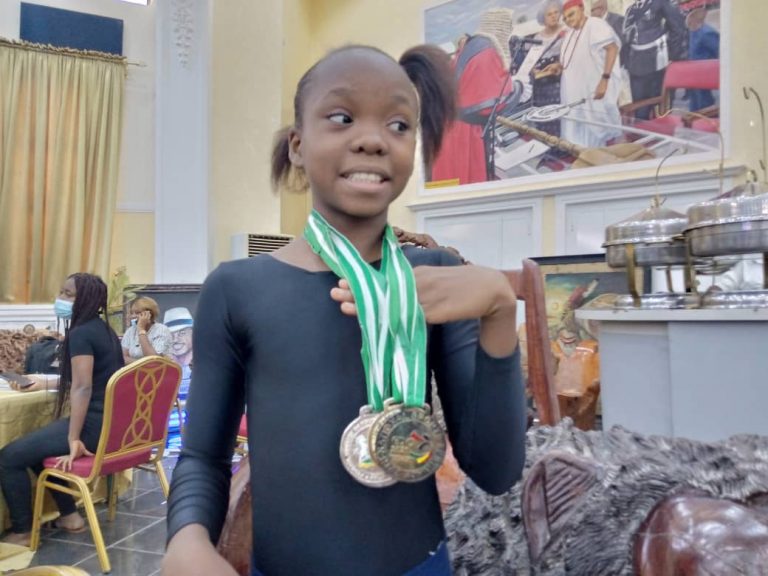 Stephanie Onusirika, who garnered four medals at the National Sports Festival (NSF), tagged “Edo 2020’’, says her feat has inspired many of her friends to develop interest in gymnastics.

The 10-year-old was the greatest revelation at the festival, where she stunned the nation with dexterous moves to cart home one gold, two silver and one bronze medals.

She said in an interview with our reporter in Awka on Tuesday that she started the game when she was three but turned professional in 2018.

It was reported that Onusirika got N2.25 million cash reward from Gov. Willie Obiano of Anambra.

The governor on Monday showered medalists with N1 million, N500,000 and N250,000 for gold, silver and bronze medals, respectively.

She said: “I am happy because l have not been to the sports festival before but was able to give a good account of myself at the first appearance.
“I started gymnastics with doing ‘contour turns’ such that I bend and make my head pass in between my legs.

“At that time, my mother said I should stop so that I do not break my neck but later she allowed me to join a club and in 2018 I started doing professional gymnastics.

“My friends see me as a star and want to join gymnastics because of me, normally I direct them to my mother,” the gymnastics wonder kid said.

Her mother, Amaka, said Stephanie was working hard to perform at the Olympics in no distant time.

She said her daughter had training tours in South Africa, Seychelles, USA and Dubai, which she attended every holiday.

According to her, the girl started gymnastics on her own before we found a gymnastics club for her.

“Her first international competition was in South Africa, where she won a gold medal in African Championship, she was eight years then.

“She also competed in the 2019 National Youth Game in Ilorin before going to Benin City for the sports festival,” she said.