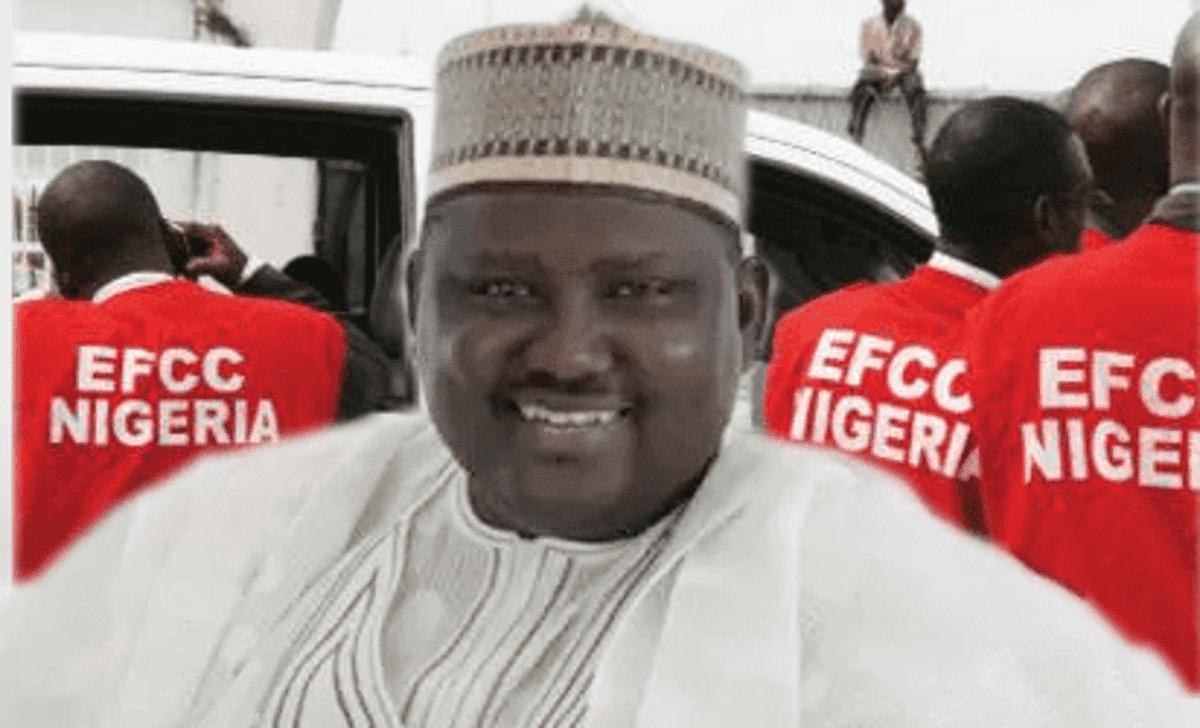 The Economic and Financial Crimes Commission (EFCC) has urged the Chief Judge of the Federal High Court (FHC), Justice John Tsoho, not to reassign Abdulrasheed Maina’s case to another judge.

The EFCC also called on Justice Tsoho not to transfer the trial of his son, Faisal, and few other cases which matters had far been heard to a new judge.

It was reported that Justice Okon Abang was the presiding judge in the trial of the Chairman, dedunct Pension Reformed Task Team (PRTT), Maina and his son, before he was transfered to Warri division of FHC.

The Chief Judge, Tsoho, had, in a March 16 circular, ordered a mass transfer of judges in the 36 divisions of the court and directed the newly posted judges to assume duty in their newly reassigned places on April 12.

JUSUN, which began its nationwide strike on April 6, suspended it on June 9.

The development, however, hindered court proceedings in the country, forcing the EFCC to apply to Justice Tsoho for a fiat to allow Justice Abang conclude some of the cases it started, including Maina’s matter.

It was reported that it is a common practice that whenever a judge is transfered before delivering judgment in a case he or she handles, the case will have to start afresh if another judge takes over.

Such case, however, can continue only where parties in the suit apply for a fiat to allow the presiding judge to conclude the matter irrespective of his or her new posting.

The judge is then bound to come from his current division to hear the case.

A competent source at the EFCC’s office told NAN that since Maina’s trial had gone far, it would only be good, in the interest of justice, for Abang to conclude the matter.

“He (Maina) has been arraigned, we have called all our witnesses and the defendant (Maina) has opened his defence.

“So it will only be proper for the presiding judge to conclude the trial to guard against delay in justice,” the source who did not want to be named said.

Recall that Maina’s trial was surrounded by controversies and dramas.

Maina (1st defendant), who was arraigned before Justice Abang on Oct. 25, 2019, by the EFCC alongside his firm, Common Input Property and Investment Ltd (2nd defendant), pleaded not guilty to the 12-count charge bordering on money laundering to the tune of N2 billion.

At the beginning of the proceedings, the judge had told Maina that he was uncomfortable with the manner the ex-pension boss stared at him.

The development generated reactions from the defence counsel as Maina, on Oct. 30, 2019, prayed the court to transfer his case to another judge on the grounds that he was not also comfortable with Abang’s way of handling his matter but the request was overruled.

He had collapsed in the courtroom while the case was ongoing over ill-health.

While Lawyer Mohammed Abubakar had consistently being appearing for the prosecution, Maina had changed counsel no few than seven times.

The court had, on June 29, 2020, varied his bail conditions eight months after his inability to meet the terms.

He jumped bail and was said to have fled to Republic of Niger around September 2020.

His surety, Sen. Ali Ndume, was remanded in Kuje Prison for about five days before Maina’s rearrest.

Maina, who was produced in court on Dec. 4, 2020, was ordered to be remanded in prison custody pending the hearing and final determination of his matter.

Although Maina had applied for a no-case submission, the court, on Dec. 21, 2020, foreclosed his right to make such application on the grounds that the ex-pension boss had had adequate time and facility to make the submission but failed to do so.

Maina, who had only called two witnesses in his defence, had, on March 8, applied for a subpoena compelling the Attorney General of the Federation (AGF), Abubakar Malami; the Central Bank of Nigeria Governor, Godwin Emefiele; former acting Chairman of EFCC, Ibrahim Magu, among others, to appear in court and testify in the ongoing case against him.

Besides, his first defence witness, Ngozika Ihuoma, while giving his evidence-in-chief, alleged that EFCC under Magu misappropriated 222 property worth N1.63 trillion recovered by the Maina-led PRTT.

He alleged that Magu had sold most of the property to his friends and associates.

Ihuoma had also told the court that the AGF and the National Security Adviser (NSA) met with Maina in Dubai, the United Arab Emirate, in January 2016 and that “after the meeting in Dubai, Maina gave the delegation intelligence report that led to the recovery of N1.3 trillion out of the N3 trillion promised to recover.”

Amidst these allegations, the judge fixed April 13 to hear subpoenaed witnesses and for trial continuation before issues of his transfer and JUSUN strike crept in.

Faisal, like his father, also jumped bail. He was arraigned on Oct. 25, 2019, by the anti-graft agency on a three-count charge bordering on money laundering.

Although he was admitted to bail, the EFCC, on Feb. 4, told the court that Maina’s son had absconded to the United States of America (USA) through the Republic of Niger after jumping bail.

His surety, Rep Sani Dan-Galadima representing Kaura-Namoda Federal Constituency of Zamfara, forfeited a property used as a bail bond following his inability to produce Faisal in court to stand his trial.

The judge had also ordered his trial to continue in his absence.

His counsel, Anayo Adibe, claimed that his client had been arrested by security operatives and was in custody of the police in Sokoto contrary to the anti-graft agency’s claim that he had sneaked to the USA.

Adibe, who disagreed that the defendant must have fled to the U.S. when his travel documents were still in the custody of the court, urged the court to make an order of enquiry into Faisal’s whereabouts.

However, after the prosecution closed its case, the defendant (Faisal) did not call any witness.

The EFCC, which called three witnesses in Faisal’s trial, was only waiting for adoption of final written address before the issues of Abang’s transfer and JUSUN strike also came up.

It was also reported that Maina’s family, on Nov. 24, 2019, called on Justice Tsoho to reassigned the case against Faisal to another judge.

They said that they had lost confidence that their son could get justice in Abang’s court.

The source also told NAN that the anti-corruption commission had also applied for a fiat in the trial of former Governor of Adamawa, Murtala Nyako and the case involving a director in Process and Industrial Development (P&ID), James Nolan.

The two cases are also before Justice Abang.

“In the office, we were asked to submit list of cases that we have gone far in prosecuting so that application for fiat could be applied for due to the recent transfer of judges handling them.

“So those cases were compiled and the applications forwarded to the chief judge,” the source said.