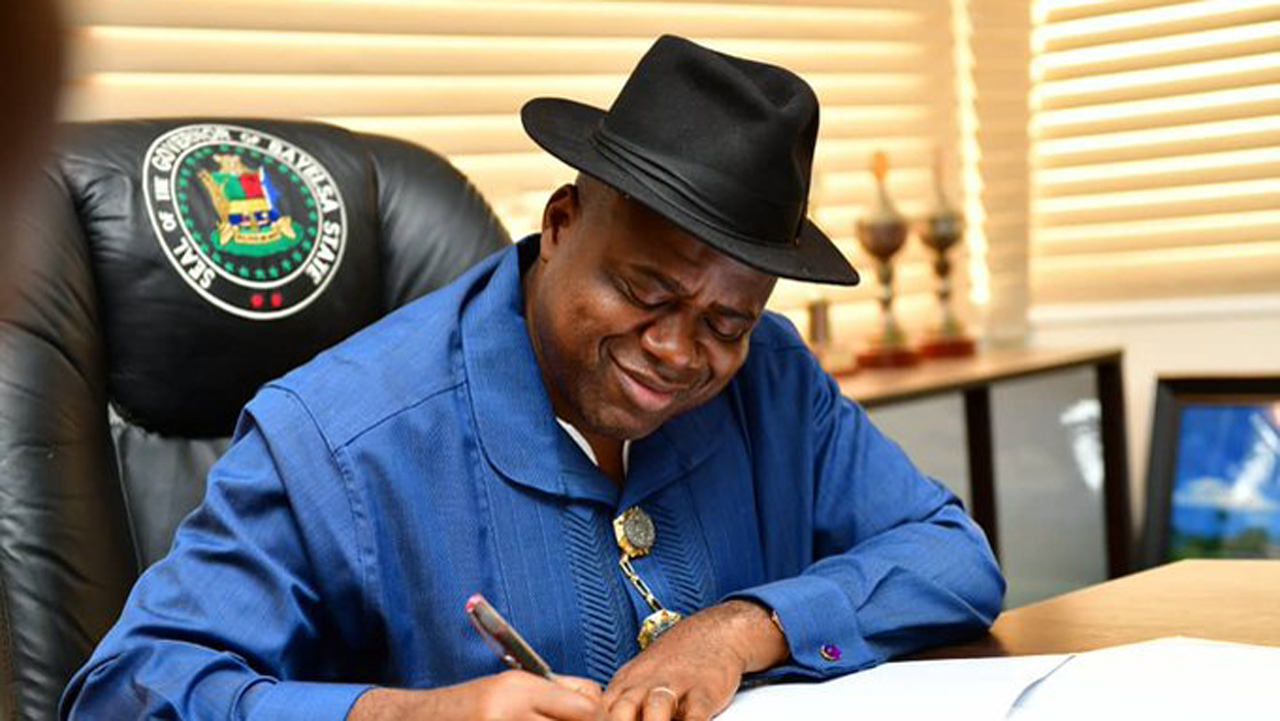 Gov. Douye Diri of Bayelsa has rewarded athletes who made the state proud at the 2020 National Sports Festival (NSF) held in April with the total sum of N195 million.

Diri said the total package of N195 million was for the gold, silver and bronze medallists, as well as the coaches and secretaries of the teams.

Daniel Alabrah, the Chief Press Secretary to Diri, in a statement on Thursday, said the governor announced the reward when he received members of the state’s contingent on Wednesday.

It was reported that Bayelsa placed third on the Edo 2020 final medals table behind Delta and Edo.

It was the state’s best position since placing fourth at the 2006 festival in Ogun.

The governor, who received the state’s contingent at the Government House, said the gesture was in appreciation of the honour the athletes and officials brought to the state.

Gold medal-winning coaches and secretaries were also rewarded with N500,000 each while individual silver medalists smiled home with N350,000.

Also, team silver medallists got N250,000 each, while silver medal-winning coaches and secretaries got N300,000 each.

The reward also got to athletes who won no medals as they were appreciated with N50,000 each, just like their coaches and secretaries who got the same amount.

The governor, while speaking at the ceremony, urged the athletes to reciprocate the gesture by improving on their performances at the next festival.

He assured that the state government would not relent in promoting sports at all levels.

“We appreciate you for bringing honour to the state. As you know, sports is no longer a social event. It is now a money-spinning business if you get committed to it.

“We pray that you will not end at just the NSF. Your (Sports) Commissioner is a world champion in wrestling, and we hope that you follow in those footsteps.

“The next sports festival in 2022 began the day Edo 2020 ended in Benin. I’m sure that if you go to Asaba 2022 with the same passion, patriotism and commitment you exhibited in Benin, you will surpass this performance.

“That is why I charge you not to relent, in order to go beyond your current position,” he said.

The governor also announced the ‘adoption’ of two Bayelsa-born athletes in line with the “Adopt-an-Athlete initiative” of the Minister of Youth and Sports Development, Sunday Dare.

Godbless had won a silver medal in the women’s 200 metres and bronze in the 4x100m relay at the festival.

Earlier in his remarks, the Commissioner for Youths and Sports Development, Daniel Igali, had recalled that with 568 athletes at the festival, Bayelsa won 56 gold, 57 silver and 58 bronze medals.

Igali commended the governor for his exemplary act of motivation and commitment to youth and sports development.

He said the athletes were determined to bring more glory to the state and appealed for them provision of more sports infrastructure for them, including buses to convey them to training.

“We went to the NSF in Edo and came back with 56 gold, 57 silver and 58 bronze medals, placing third overall.

“The story about the sports festival was about Bayelsa. Not only did we punch a bit above our weight, we also had the athlete with the highest gold medals. She won eight gold medals.

“We assure you (the governor) that when the time comes, beginning today with your full backing, we would go to Asaba 2022 and make you proud again,” he said.

It was reported that one minute of silence was observed in honour of an athlete, Samson Ndukwe, who won gold at the festival but passed on before the reception for Team Bayelsa.