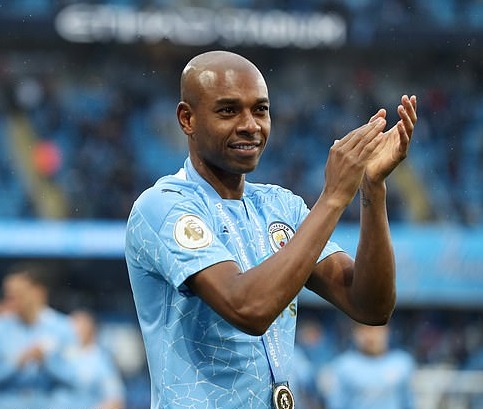 Manchester City captain Fernandinho insists he has unfinished business at the club after signing a one-year contract extension.

The 36-year-old will stay on at the Etihad Stadium until 2022 and is targeting another shot at the UEFA Champions League.

His team lost to Chelsea in their first final last month.

“In my head and my mind, the job is not done yet and so that’s why I decided to stay here another year and try to help the team and the club to achieve the goals they’re looking for,” said the Brazilian.

“In my point of view, we can do that. There’s still places to improve and to get those targets.

“Obviously, for me and for my family it’s a pleasure to stay in Manchester for one more year.

“If I can keep doing the same way, leading them inside the pitch, off the pitch, to help them to improve and get better and to perform better during the games, I will be the happiest person there.”

Fernandinho joined from Shakhtar Donetsk in 2013 and has made 350 appearances and won 12 domestic trophies during that time.

He became the joint-most decorated player in League Cup history last season when he won a sixth Carabao Cup.

“He is an outstanding footballer —— one of the best in the world in his position —- and an exemplary professional.”

Konta forced to withdraw from Wimbledon due to virus close contact

3 docked for alleged theft of 6 tricycles