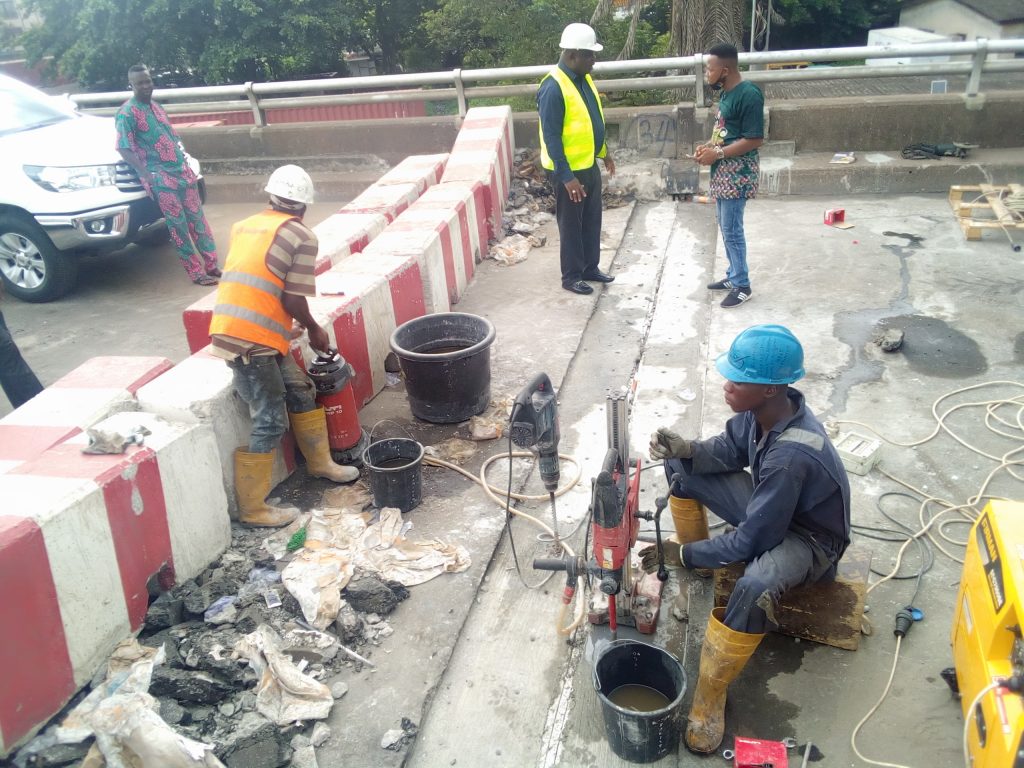 The Federal Government on Friday said it would shut the Ijora ramp of Eko Bridge from midnight, to be able to fix a major expansion joint undergoing rehabilitation.

The Federal Controller of Works in Lagos, Mr Olukayode Popoola, said this during an inspection of the bridge.

He said that construction works on the Costain section of the bridge had been completed, while the entire project was 35 per cent complete.

Popoola said that it was time to continue work on a major expansion joint where traffic coming from Apongbon and the one from Ijora merged around Iponri section on the Eko Bridge.

The controller said in order to remove and replace the expansion joint where traffic merged, the Ijora ramp of the bridge must be shut.

He said construction work was progressing fast because of clemency of weather, projecting that the project would be delivered ahead of the Aug. 3 scheduled date.

“What we are doing is still the same 10 weeks programme of rehabilitation of Eko Bridge.

“Vehicles that are coming from Ijora end and the ones coming from Apongbon, the two bridges merge at a point.

“At that point where they merge, all the vehicles will now use one lane, so, that is the lane where we want to now change the expansion joint.

“We were working on Apongbon, Iponri, Alaka-bound lane. Now, we want to work on the same lane which is between Costain and Alaka.

“Where we are now is Iponri, but all the vehicles that are coming from Ijora, they meet at a point with the vehicles coming from Apongbon, so, the expansion joint is what we want to now replace.

“As a result of that, the two bridges will now be affected,” he said.

Popoola said vehicles coming from both Ijora and Apongbon could use the Costain ramp as alternative route to go through Breweries to Abebe Village, Eric Moore to either link Surulere, Funsho Williams Avenue, Stadium or Ikorodu Road.

“The point where we want to work now connects the two bridges together.

“We plan to close the Ijora ramp this night,” the controller said.

He decried activities of commercial motorcycle operators who usually came in large numbers at night to remove barricades around the construction zones.

Popoola said that the motorcycle operators popularly referred to as Okada riders usually carried out their actions whenever they noticed the Police patrol was not within the area.

He warned the riders to desist from the act as any of them caught would be apprehended and prosecuted.

“We have barricaded the construction zone so that no traffic would move on the bridge but we are surprised that we wake up in the morning and they would have opened the place.

“We now found out that, say between 20 and 30 people come together and push the barrier, and then the Okada riders will be using the bridge.

“I am appealing to them to desist from these criminal activities,” he said.

Popoola said that the Federal Government was spending so much money to fix the bridge and Okada riders should not delay the contractor’s work.

He said that four bearings had been replaced and the fourth expansion joint was in the process of being removed for replacement.

The controller said work was ongoing under the bridge deck, which was sitting on reinforcements on jerks.

Conducting journalists round the various construction zones, he gave technical details as well as the difference between types of expansion joints being used.

Mr Kaadi Ghassan, Project Manager, Buildwell Plants and Equipment Industries Ltd, contractors on the project, gave additional information on the technicalities on the portions under repairs.

Earlier, he presented pictures of tens of commercial motorcycle operators taken on his phone to the controller, expressing worry over the menace.

Our correspondent reports that Eko Bridge was shut on June 4, with traffic diverted for the second phase of the rehabilitation of the Costain-bound section of the bridge