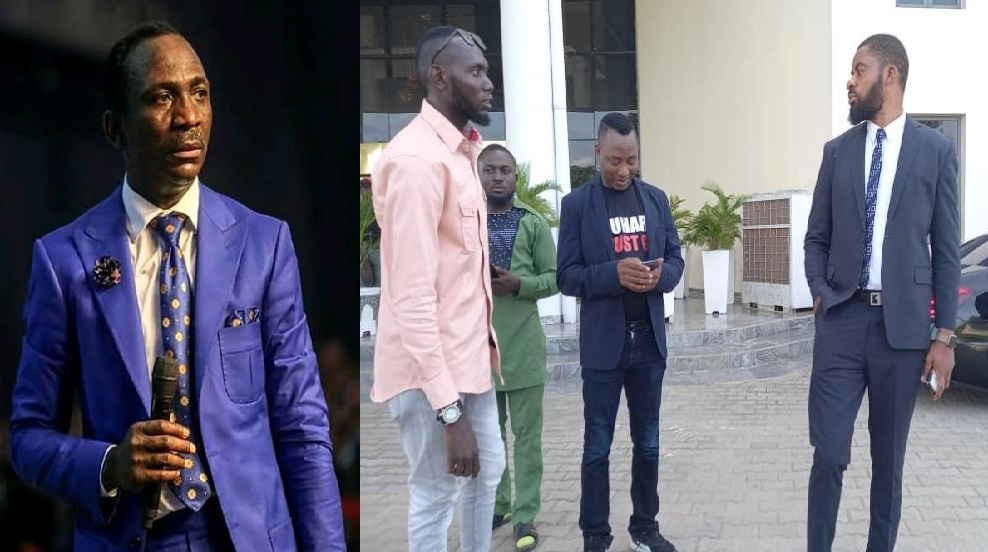 The human rights activists, Omoyele Sowore and Deji Adeyanju on Monday met the Senior Pastor of Dunamis International Gospel Centre, Dr. Paul Enenche over the arrest of five activists at the church premises for wearing #BuhariMustGo T-Shirts on Sunday.

The activists arrived the church around 3:00pm alongside their lawyer, Barrister Abubakar Marshal and had a close door meeting with the pastor where it was confirmed that the arrest was made by operatives of Department of State Service (DSS) but not the church security officials.

Addressing journalists after meeting outside the church premises Adeyanju explained that the church have no hand in the entire incident that happened adding that the pastor informed them that he had taken steps as at 7:00am to ensure that the activists were released.

Pastor Enenche according to Adeyanju confirmed that the activists committed no crime and that he has reached out to the DSS authority regarding the matter.

In his word, “There is something the pastor said which I must reemphasis here that the reason why they did not like the fact that the activists came and were making the noise here that he doesn’t want this thing to be misconstrued that it is the church that is sponsoring the protest.”

While making clarification on the matter, SaharaReporter Publisher, Mr. Omoyele Sowore said that the pastor denied the claims by some persons that the activists were trying to disrupt the church service.

He said the pastor confirmed to them that he personally saw them when they came out for altar call that he was even excited seeing them and that it the claim was not true.

Sowore said, “The came here and it is their right, I wore my own T Shirt to meet with him today my #BuhariMustGo T-Shirt. So, there is nobody who can tell you what to wear to church or to wear to school except the school that have uniforms.

“But we are adults and if we are tired of the system and we say the system must collapse it is our right to express ourselves freely.  I told the pastor when he said he was not happy when the activists were trying to protest within the premises that with the way things are going on more and more people will be wearing #BuhariMustGo T-Shirts to the church because people are tired of Buhari regime.

“We have a respectable agreement and some disagreement over this issue but what is important to me and why I don’t want to drag this for too long is the release of these individuals from detention.

“We are going to wait till evening because we requested that they should be released today (Monday).  Nobody knows their whereabouts. We don’t know whether they have been fed or they have been tortured.

“Meanwhile there was a mild drama at the gate of the church when the activists were granting press interview when some overzealous policemen challenged them and pointed guns at the journalists who were conducting the interview.

The situation led to heated arguments as gum wielding operatives insisted to know their mission for granting Interviews at the gate.

The confusion which lasted for few minutes was brought under control when the activists maintained their ground that they have not violated any law with their action.

Meanwhile, NEWSVERGE report that the whereabouts of the five activists remained unknown and they have not been released as at the time of filing this report.