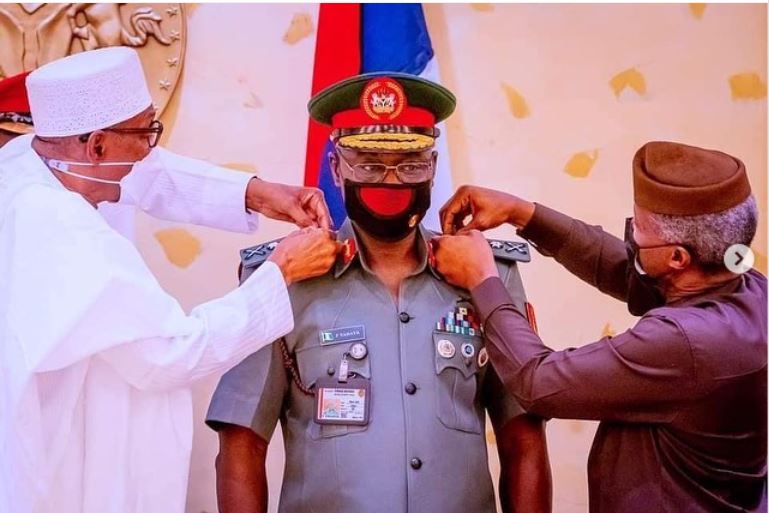 President Muhammadu Buhari of Nigeria on Wednesday elevated and decorated the Chief of Army Staff (COAS), Major General Faruk Yahaya with a new badge of rank of Lieutenant General.

This is coming after the National Assembly screened and confirmed the COAS in line with the constitutional provisions.

Speaking shortly after his decoration, the COAS expressed his appreciation to the President for appointing him to serve and command the Nigerian Army as the 22nd COAS.

He pledged to discharge his duties professionally and diligently with utmost respect for the fundamental rights of the citizenry.

Lieutenant General Yahaya also assured the President of his loyalty to the Constitution and Government of the Federal Republic of Nigeria.

The COAS, on arrival at the Army Headquarters, after his decoration, was received by Principal Staff Officers, who felicitated with him on his well-deserved decoration.

They also presented him with a customized congratulatory card for his elevation to the enviable rank of Lieutenant General. This ceremony took place after he had inspected a regimental Special Quarter Guard mounted in his honour; a cherished military tradition that is symbolic to signpost the significance of his arrival in Army Headquarters for the first time in Lieutenant General rank since he assumed command on 28 May 21.