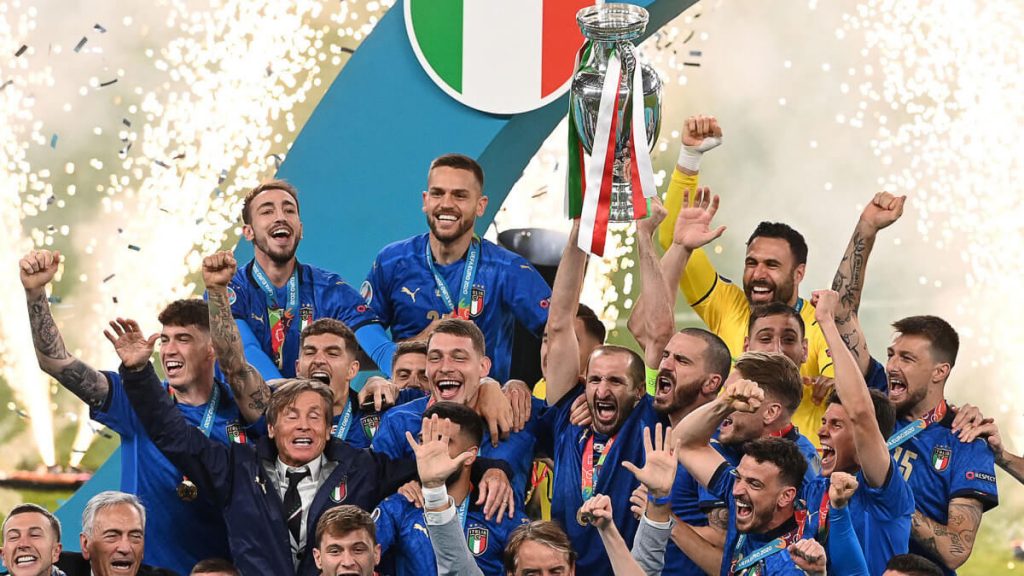 Football went to Rome from Wembley in London on Sunday, thanks to an astonishing penalty kicks shootout which ended 3-2 in Italy’s favour against England in the Euro 2020 final.

After a 1-1 draw following 120 minutes, Marcus Rashford and Jadon Sancho, brought on at the death just to take penalty kicks, both missed.

It is heartbreak for England, seeking to end a title drought from 1966, and for manager Gareth Southgate who missed a crucial spot-kick in the 1996 semi-final shootout loss against Germany.

His selection of kickers will be long questioned now.

Shaw volleyed home from the left in under two minutes for the fastest-ever goal in a Euro final.

The pre-match build-up was marred by seemingly ticketless supporters charging barriers in an attempt to access the stadium.

Several English media outlets reported on the incidents and videos on social media showed fans rushing at the gates.

That gave the impression of a fuller house than the 65,000 permitted in the coronavirus pandemic.

With only 7,500 wearing the blue of Italy, the vast majority were soon out of their seats —- if they were ever in them to begin with.

Ironically it was England’s nerves that led to the goal when defender Harry Maguire hit a needless backpass out for a corner-kick and a lightning counter-attack broke the deadlock.

Shaw started the move by finding team captain Harry Kane, who in turn released the marauding Trippier on the right.

Shaw continued his run to the edge of the six-yard box and found the net via the inside of the post in just one minute 56 seconds.

The historic goal, hours before his 26th birthday, made Shaw just the third English goalscorer in a major final after Geoff Hurst and Martin Peters.

Italy were shocked and another cross from Trippier, brought in for Saka as Southgate changed to a back three, caused concern as England dominated the early stages.

Jordan Pickford’s only save, in first-half injury-time, was a simple one from Marco Verratti.

Italy were playing on the 39th anniversary of their 1982 FIFA World Cup win — their third of four.

They kept alive their dream of another European crown when Bonucci forced home after Verrati’s header was touched onto the post.

Bonucci, who also played in the Euro 2012 final which was lost to Spain alongside captain Giorgio Chiellini, became the oldest final goalscorer at 34 years and 71 days.

The lively Chiesa going off injured for Federico Bernardeschi was a blow for Italy’s attack.

Chiellini saved the day at the other end with an astounding late tackle on Raheem Sterling as the game petered out to penalty kicks.

But Bonucci kept his cool and Bernardeschi drilled one down the middle between Rashford and Sancho both missing terrible kicks — off the post and saved — from stuttered run-ups.

Chelsea’s reliable Jorginho, who netted the winning shootout kick against Spain in the semi-final, had his shot touched onto the post.

But Saka’s weak kick was met by Donnarumma diving to his left to secure victory.