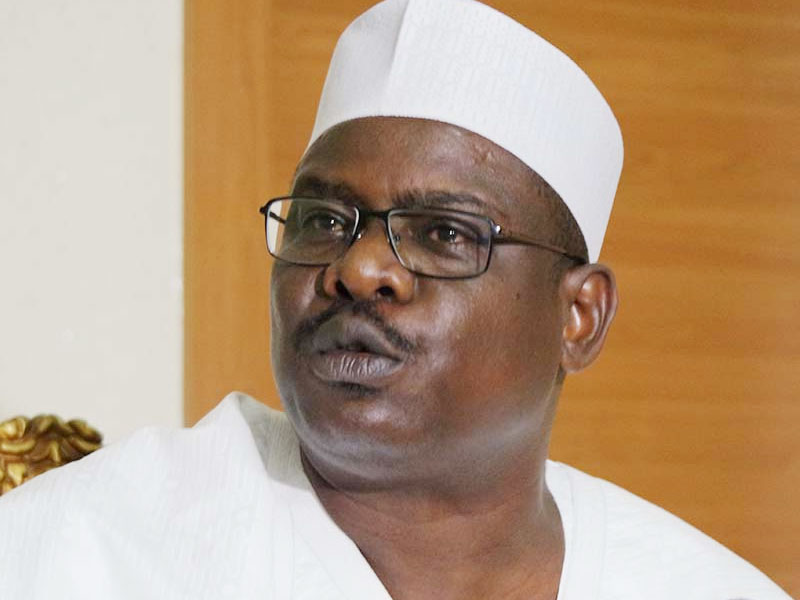 Sen. Ali Ndume (APC-Borno) has prayed a Federal High Court, Abuja for an order releasing his building’s Certificate of Occupancy (C of O) used as bail bond in the release of Abdulrasheed Maina from Kuje Prison, following his rearrest after he jumped bail in September 2020.

Maina was released on bail from the correctional service centre on July 27 nine months after he was arraigned.

His release on bail was made possible following Ndume’s resolve to stand as his surety after the lawmaker used his Abuja property’s title documents worth N500 million as bail bond in compliance with some of the bail conditions.

Ndume is currently Chairman, Senate Committee on Army at the National Assembly.

When the matter was called, Counsel to Ndume informed the court that he had a pending application dated and filed on Dec. 15, 2020.

“We are praying the court to discharge the applicant, formerly as a surety, in the matter and for the documents of title that were deposited in court to be released to him, considering the fact that the first defendant, Abdulrasheed Maina that jumped bail has been rearrested and is in the custody of the complainant (EFCC),” he said.

Justice Abang then asked Oru if there was any pending appeal of the matter before the Court of Appeal and he answered in affirmative.

The lawyer said though the appealed had been entered at the appellant court in relation to Ndume’s complaint, it was not in respect to the substantive matter.

“Do I have jurisdiction to entertain this matter now,” the judge asked.

Responding, Oru said: “Ordinarily, if the appeal has been entered, this court as presently constituted will not have jurisdiction to entertain the application but in the present circumstances, considering the intervening circumstances that the defendant (Maina) has been rearrested and facing his trial before this court now, we are of the opinion that the court can hear the matter subject to your lordship’s discretion.”

However, Counsel to the Economic and Financial Crimes Commission (EFCC), Mohammed Abubakar, opposed the application.

Abubakar argued that the court had no jurisdiction to entertain the suit since the matter was already before the Court of Appeal.

“We filed a notice of preliminary objection dated Dec. 18, 2020, and filed on Dec. 21, 2020. We urge the court to dismiss the application for being incompetent,” he said.

The EFCC lawyer argued further that the reply on point of law of the applicant (Ndume) “is short of the Provision of Order 4, Rule 11 of the Court of Appeal, 2016.

“The applicant (Ndume) s deemed to have admitted our submission.”

He said if the application was granted and the court ordered the release of the title documents to applicant, there would be nothing left again for the court of appeal to determine.

However, Oru said that though there was no date fixed for the appeal now, he said: “whichever way the appeal goes will not affect this application” before justice Abang.

“The important thing is that Maina has been rearrested and this is the fallout of the who issue,” he added.

When Abang asked if Ndume’s travel passport had been released to him, his lawyer said the document was still in the custody of the court.

Justice Abang, who adjourned the matter until Oct. 4, said he would first make findings on the EFCC preliminary objection before delivering the ruling.

“If the objection succeeds, that will be the end of the matter but if it does not, I will then rule on the substantive application,” he said.

It was reported that Justice Abang, the trial judge, had, on Jan. 28, 2020, varied Maina’s bail from N1 billion to N500 million, following his inability to meet the earlier terms which he considered too stringent.

Abang also ordered Maina to produce a serving senator as surety who must own a property worth N500 million in either Asokoro, Maitama, Wuse II, Central Business District or Katampe Districts in Abuja.

This was against two serving senators he was earlier ordered to produce on Nov. 24, 2019 as a condition for granting bail.

The judge maintained that the surety must accompany the defendant to court on every trial date, registered his attendance before leaving.

Abang also ruled that the surety must submit his three years tax clearance certificate for verification, among others.

He warned that Maina’s bail would be revoked any day his surety failed to accompany him to court for his trial.

However, on June 23, 2020, the then Maina’s Counsel, Joe Gadzama, SAN, announced to the court that Ndume, who represents Borno South where Maina hails from, had decided to stand as a surety for the former pension reformed boss.

After Maina was finally released on bail from the correctional centre, he stopped attending his trial from Sept. 29, 2020.

On Oct. 2, 2020 when the matter came up, the judge asked Ndume, who was always in court, if he knew where Maina was after he had failed to attend proceeding for the third time, the lawmaker responded that he did not know Maina’s whereabouts.

The senator, however, begged the court to reconsider him, saying that was the first time he would be standing as surety in court.

“I did not foresee this circumstances my lord.

“I want it to also be on record that as a senator, I represent the good, the bad and the ugly of the constituency.

“Right now, my hands are tight,” he had said.

Even when Ndume begged the court for a review of the conditions, Abang directed the registrar of the court to read out the affidavit deposed to by the lawmaker on May 5, 2020, as surety where in paragraph nine, he pledged to always produce Maina in court and forfeit the bail bond of N500 million to the Federal Government should Maina jumped bail.

Ndume had told the court that he deposed to the affidavit after Maina’s wife and his uncle assured him that the accuse would always appear in court and would not jump bail.

He also told the court that some prominent Nigerians prevailed on him to stand as Maina’s surety.

This development made the Counsel to the EFCC, Mohammed Abubakar, to ask the court, on Nov. 18, 2020, to revoke Maina’s bail, issue a warrant for his arrest and continue his trial in absentia.

Abubakar, on Nov. 23, 2020, also prayed the court to make an order for his surety, Sen. Ndume, to forfeit the N500 million bail bond or be committed to prison pending when he was able to pay the money into the federation account or produce Maina, who was alleged to have jumped bail.

Justice Abang granted EFCC’s prayers and ordered Ndume to be remanded in prison, pending when he fulfilled either of the three conditions contained in the order.

However, after spending about four days at Kuje Prison, Ndume was released on bail following his lawyer’s application at the Court of Appeal against his remand, along with an application for his bail before Justice Abang.

The senator, who was granted bail based on his record of good behaviour before the court and the discretionary powers of the court, was ordered to produce one surety who must be a responsible person and a resident of Abuja and must present evidence of ownership of a landed property anywhere within the FCT.

In addition, the surety must also depose to an affidavit of means to indicate his readiness to forfeit the bail guaranty should the senator jump bail, among others.

It was also recalled that Maina was, on Dec. 4, 2020, produced before the court after he was rearrested in the Republic of Niger, where he was alleged to have fled to.

Justice Abang then ordered Maina to be remanded at Kuje Prison pending the hearing and determination of the matter.

It was reported that the EFCC had, on Oct. 25, 2019, charged Maina and his son, Faisal, before the court alongside his firm, Common Input Property and Investment Ltd.

Although Maina is charged with 12-counts bordering on money laundering, he had, however, pleaded not guilty to all the charges.

Welder, 26, in court over alleged robbery