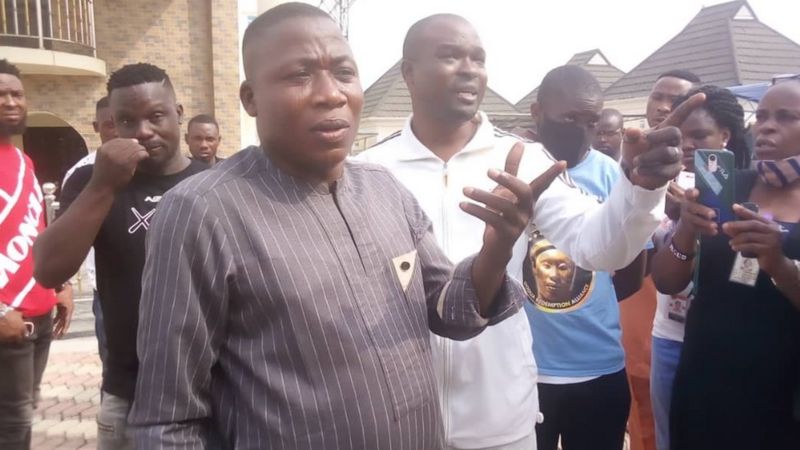 Yoruba Nation agitator, Sunday Adeyemo, popularly called Sunday Igboho, is currently being tried behind closed doors at the Cour D’Appel De Cotonou. Journalists and his supporters were barred from the court proceeding, The PUNCH was told.

However, his supporters said they were not harassed nor sent out of the court premises. The Beninese court had last Thursday adjourned Igboho’s case till Monday after his five lawyers failed to convince the prosecutor that he had no case to answer.

According to The Punch, the Beninese authorities have, however, released Ropo, the agitator’s wife, who was arrested with the 48-year-old activist on Monday, July 19, 2021, by the International Criminal Police Organisation at the Cadjèhoun Airport in Cotonou, Republic of Benin on their way to Germany.

On his part, Igboho was returned to police custody. The PUNCH had reported that Igboho is in court for possible extradition charges. Many supporters of Yoruba Nation agitator had thronged the court on Monday to witness the trial of the activist.

This is despite earlier warnings that Benin Republic courts are not used to large crowds during sittings.
Some of the supporters had arrived in Benin Republic on Sunday with a Yoruba group offering free accommodation.

Ibrahim Salami, one of the Cotonou, Benin Republic-based lawyers of Sunday Igboho had said on Saturday said that extradition charges were been expected from the Nigerian government. The counsel insisted that only a Nigerian passport was found on the Yoruba rights activist, adding that he was not being tried for possessing a fake passport.

Following the bloody raid on his Sooka residence in Ibadan, Oyo State, the Department of State Services had earlier claimed local and international driving licences in his name. ATM cards, a German residence permit No. YO2N6K1NY bearing his name, and a passport were allegedly recovered.

The lawyer had said, “When he left Nigeria, he took the backdoor into Benin. It was at the airport that security operatives stopped him that he was on the watchlist. He didn’t go against any law in Benin Republic. They didn’t find any Beninese passport on him. He had a Nigerian passport with a German residency card. He needed no visa at that point.

“When we understudied the case, we realised that the Nigerian government had not filed a case for extradition. They only claimed that he is wanted in Nigeria for criminal offences. Our argument is that he was arrested because of Nigeria’s request, and there is no proof to show that he is a criminal.”