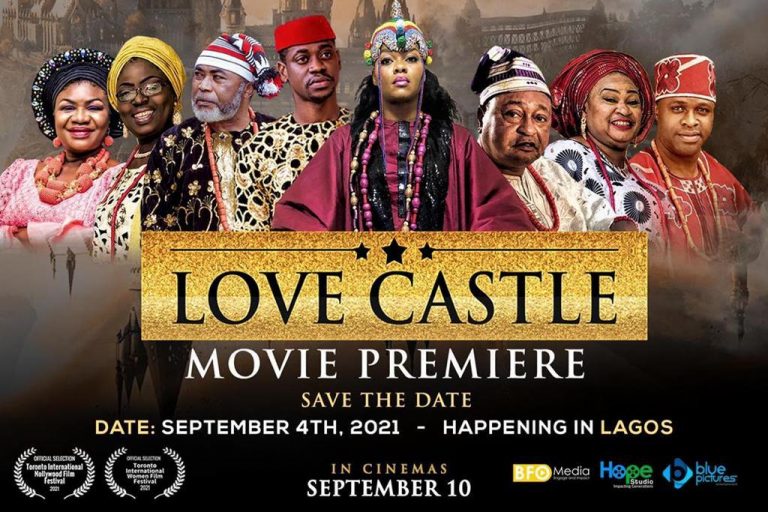 A culture-laced Nollywood movie, “Love Castle” is set to hit cinemas across the world on Sept. 10, the Movie producer, Funke Ogunmola has said.

The movie is produced majorly in English but sparingly utilising Hausa, Igbo and Yoruba languages.

The Movie, ‘Love Castle’ which featured late Rachael Oniga among other Nollywood Stars including Desmond Elliot, is a captivating story of culture interwoven with disability.

In an interview with our correspondent on Friday, Ogunmola said ‘Adetutu had to leave her husband and daughter back in Houston Texas, U.S.A. against her wish and that of her husband to become a Regent in Nigeria at the death of her father.

“The cascading events that follow result in secrets being revealed. Regent Adetutu is trapped in the web of emotions and culture, with deadening taboos staring her in the face.”

Ogunmola, who also wrote the movie and featured in its cast, noted that the movie concept had played in her head for over 10 years before she put pen to paper in 2018 to write the first draft.

She said that it took her over a year of several drafts, revisions, and research to finally get the script ready in 2019.

Love Castle was shot in Ibadan, Nigeria in November 2019 and in Houston Texas in February 2020. The U.S.A. filming was completed just two weeks before the pandemic lockdown of 2020 began.

Also speaking about the movie after her filming role in Ibadan, Nollywood star, Kehinde Bankole described the story as exciting.

“The route the movie producer went in telling this story is different. It is entertaining, it is rich in culture. I enjoyed every bit of the filming,” she said.

According to Ogunmola, the late Rachael Oniga after reading the script, sent her a message on WhatsApp saying: “This is a wonderful story and well scripted. I am in love with it.”

For the movie director, Desmond Elliott, he said that culture was well captured in the story. “I love the way the story transitioned from Western to Eastern Nigeria.”

The movie is set for release Sept. 10 after being premiered in Lagos on Sept. 4.